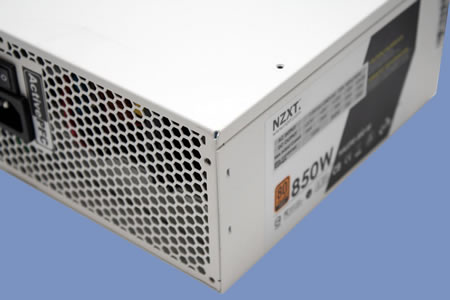 If you've seen the simplified graphs over on the previous page you will undoubtedly already have a good idea of how the NZXT 850w performs. However, certain results from the test can be too difficult to incorporate into the existing graphs, and for this reason all of the result data is also provided in the table format below.

All testing is conducting using OC3D's trusty SunMoon SM-268+ DC load tester. This equipment is capable of placing a user specified load on all of the PSU's rails (+3.3v, +5v, +12v, -12v, +5vSB) up to a maximum load of 1680w.  As the maximum load for this device on the +12v rail is restricted to 75A we can also call on additional help from our Analogic Series 2000 DC load tester, so that anything up to an additional 166A can be added if necessary. All testing is conducted at 50°C (±5%) with the results being recorded using a Fluke Multimeter and Thermostat.

UPDATE 03/10/10: Further to a post by a member of our forum we have become aware of a mis-calculation in our load levels for this PSU. As a result, the table below has been adjusted since the initial launch of this review on the 01/10/10. All results are now CORRECT.

OK. Before we even talk about anything else, I think you should take a look at the DC Watts being pulled in test TMax1. Yes, you did read that right. That's a whopping 1088W pulled from a PSU rated at only 850w! I have to admit that my face was more crinkled than a packet of McCoy's crisps at that stage, but thankfully the NZXT knew its limits and shut down elegantly as I attempted to push it any further.

The rest of the results are pretty much as they should be. No crazy voltages during the crossload tests, no fire breathing dragons during the Max Load test and fairly average results everywhere else. So let's move on and see what the ripple results from the scope have in store...

Ripple refers to the small fluctuations in voltage that occur in all PSU's on a millisecond scale. Large quantities of ripple on a PSU can damage or kill components in your PC over time and therefore testing a PSU's performance in this area is just as important as any other part. ATX specification states that ripple should be no higher than 50mV on the +3.3v/+5v rails and 120mV on the +12v rails, so what we're looking for in the screenshots above is for all rails to stay well within these limits during Test 1-4 at the very least.

Does the NZXT Hale manage it? JUST. While the +12v rail hits an extremely impressive maximum result of 38mVpp at 100% load in test 4, the +3.3v and +5v rails lead a lot to be desired, barely managing to stay within ATX specifications. For a PSU trying to make its mark on the enthusiast sector there's definitely still work here to be done.

Whoops, this is where I hold my hands up and admit my mistake. In the results published on the 01/10, the ripple for the +3.3v and +5v rails was just within ATX specifications. However, thanks to a member of our forums pointing out a mistake in the load levels, the PSU was re-tested and now the ripple results for these two rails is MUCH better. 28mVpp on the +3.3v rail, 24mVpp on the +5v rail and 38mVpp on the +12v rail at full load - simply awesome!

Mr. Strawberry
i could do with this PSU

Alicarve
I want one to match my case

seriously if i want my PSU white, i'll paint it ..

And replacing the fan is just as easy as opening a trash can!

SiN
It's a good PSU besides the ripple, which is a disappointment, for the price they should have buckled it down some more.Quote