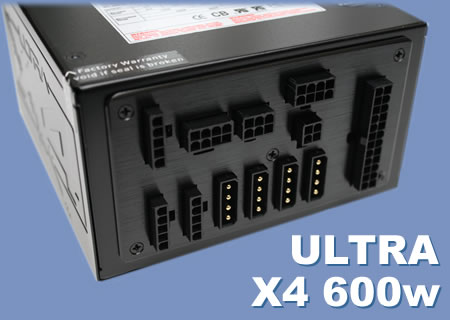 "Take one PSU, remove from packaging and insert into oven pre-heated to 50°C for a total of two hours. During cooking be sure to batter PSU regularly with a wide range of load tests conducted using professional electronic load equipment."

Although this may sound more like something that you'd normally hear on Ready, Steady, Cook! the likeness to our PSU testing procedures here at OC3D is uncanny. During todays testing we will be placing the Ultra X4 under 25%, 50%, 75% and 100% load levels inside a hot box regulated to a temperature of around 50°C. Additional 'Cross Load' and a 'Max Load' tests will also be performed under these conditions to simulate how the PSU reacts to heavily uneven loads as well as running above its specified output.

All of these tests are conducted using professional SunMoon and Analogic DC load equipment with the results being fed back to a control computer for analysis. The final results you see below in tabular form represent the 'worst case' output from the PSU during these tests.

Starting at the very beginning with the results from test 1, everything is fairly normal with the 5v and 12v rails being slightly over-volted to help keep up appearances when a heavy load is applied later on. Efficiency is also pretty reasonable sitting at bang on 85% and the exhaust temp is only a fraction of a degree above the intake. Test 2 increases the load slightly and as expected the voltage on the rails takes an ever so slight dip. Efficiency on the other hand increases to over 87% showing that the X4 really does need to be given a reasonable load in order to perform at its best.

Moving on to test 3 with the PSU load now at 455w, voltages take a slight drop yet again with the worst of the bunch being the +3.3v rail now running at 3.24v. Efficiency also drops by a small amount down to 86.33%, but still the performance and exhaust temperatures of the unit are very good. This trend continues into test 4 where we end up with efficiency just over 84% and the +3.3v rail running at 3.22v.

The cross-load tests 5 & 6 give very little cause for concern with the only minor issues being the efficiency dropping to 77% in test 5 and the -12V rail hitting -13.69v during test 6. However as I always stress, these tests are not indicative of any real-world scenario, so the results count little towards the conclusion.

Finally in test 7 the X4 is really put through its paces with a 740w load. This was the highest load that the X4 600w could maintain reasonable voltages and ripple results for at least 10 minutes. Here we can see that most of the strain is bared by the +5v rail that takes a nasty hit down to 4.60v, but other than that the X4 actually manages quite reasonable results. Interestingly though, the unit was also able to hold a whopping 850w load for several minutes before the +5v rail dropped to 3.5v and UVP kicked in and powered the unit off. Teasing to say the least!

Ripple refers to the small fluctuations in voltage that occur in all PSU's on a millisecond scale. Large quantities of ripple on a PSU can damage or kill components in your PC over time and therefore testing a PSU's performance in this area is just as important as any other part. Unfortunately ripple cannot be measured using a standard multimeter and requires a specialist device called an oscilloscope. The results you see above are taken from our Rigol 25Mhz 400MSa/s scope that can save 'screenshots' of its data to a USB memory stick.

So how did the X4 perform? In a word: Excellent.

At no point during the tests did the ripple go outside of ATX specs (50mV on +3.3v/+5v, 120mV on +12v). This even includes the results of test 7 where the X4 600w was subjected to a 740w load. Comparing these results to that of the Corsair HX650w reviewed only last week we can see that the X4 exchanges blows with the HX across most of the results. However, when it comes to the cross-load results the X4 manages to keep its cool with smooth output while the Corsair actually goes out of spec. Considering that the X4 has a mixed bag of lower-rated capacitors, this is a pretty surprising result.

So far things are looking pretty good for Ultra's latest PSU, but will it tick all of the boxes when it comes to rounding up for the conclusion? Let's find out...

mayhem
Think its about time they had Real decent connectors on all Modular PSU's esp when you Spending so much. it wouldnt harm them at all.Quote

TWeaKoR
I've got an Ultra X2 550W that was given to me after my old PSU blew up. So far, it seems fine, aside from the fact that the fan spins up loudly without any real load. It's good to see that they are in fact improving with the modular cables - on my unit the SATA power leads are connected to the PSU with SATA connectors, and those things are a bugger for staying in. It seems every time I open the case one of them comes loose and I lose either a hard drive or the DVD drive.

Not sure I'll be eyeing up Ultra though when I upgrade in a couple months. Corsair have my eye, especially given recent events and the fact that they guarantee it won't blow up

Btw what is the cross load test? I know it might not be indicative of real-world, but it is worrying about that -12V rail being 11.4% out.Quote

Socks
I usd o love the old hiper power supplies. Only for their presentation skills. They really should try to break the mounld in power spply designs imo. I think it would make a nice/different change.

Looks like a good psu though, except the price tag. we giving half points now? or hav we always givn them and I've only just noticed? ;-)Quote
Reply