CPU Performance - Do you need a crazy CPU to run this game?

CPU Performance - Do you need a crazy CPU to run this game?

When it comes to CPU performance, Call of Duty: Modern Warfare has two factors that place the game in a great position. Those factors are DirectX 12 support and the existing CPU optimisation efforts of Treyarch for Call of Duty: Black Ops 4.

As we mentioned before in this review, one of Treyarch's primary focuses with Black Ops 4 was to deliver a stellar Battle Royale experience with the game's Blackout mode. The Call of Duty series had never tried placing so many players on a single map before, creating the need for a lot of CPU optimisation, especially on console platforms. While Infinity Ward handled modern Warfare's development, Treyarch's use of the IW Engine ensured that many of these engine changes could transfer over from Black Ops 4.

Next up comes DirectX 12 support, which is known for its ability to reduce CPU loads when utilised correctly on PC. Releasing without a DirectX 11 version of the game also helps in this regard, as there is no need to focusing on maintaining backwards compatibility. DirectX 12 also helps Infinity Ward make good use of multi-threaded processors.

In Call of Duty: Warzone, it is clear that higher core counts are beneficial. Every increase in core count has yielded us additional performance. We can even see hyperthreading deliver a significant boost to Warzone's lower percentile framerates, a factor that makes the game feel a lot smoother. 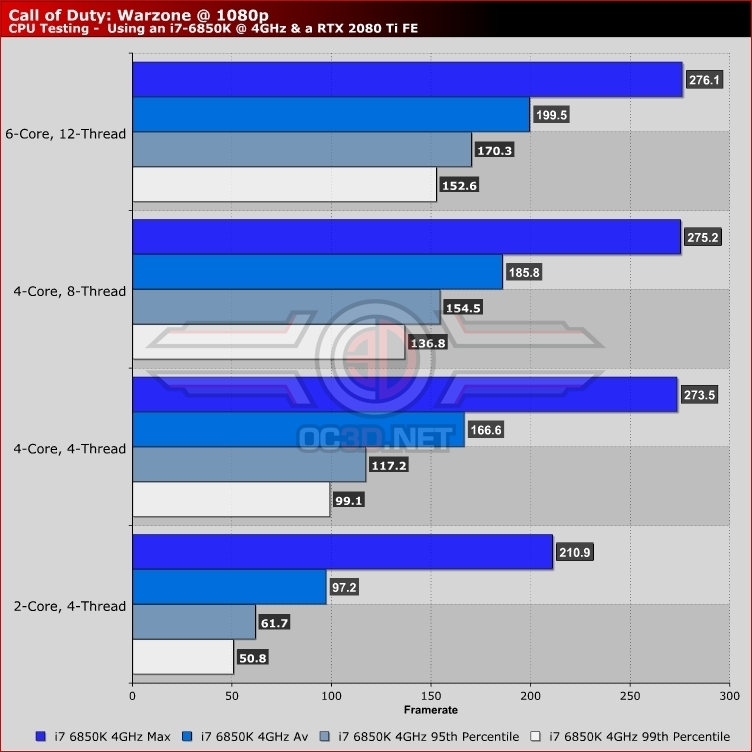