Unfortunately, we do not have the time to retest every graphics card in our offices, and our games tester currently lacks access to Radeon RX 6800 series and Geforce RTX 30 series graphics cards. With that in mind, we did what we could by covering performance using Pascal, Turing and RDNA products from Nvidia and AMD.

At 1080p High settings, we saw large performance gains across all of the GPUs that we tested, bringing all GPUs to 60+ FPS average framerates. The largest gains are seen on AMD's RX 5700 XT and Nvidia's GTX 1080 Ti, highlighting larger performance gains for graphics cards which do not utilise ray tracing acceleration.

Another thing that's worth noting is that the GTX 1080 Ti delivers higher 1st percentile framerates than our RTX 2080 Ti, which should mean that the GTX 1080 Ti is less CPU-limited. This could mean that Crytek's attempts at ray tracing acceleration is actively damaging the RTX 2080 Ti's performance at 1080p by adding additional CPU overhead. We hope to confirm this with additional testing soon. 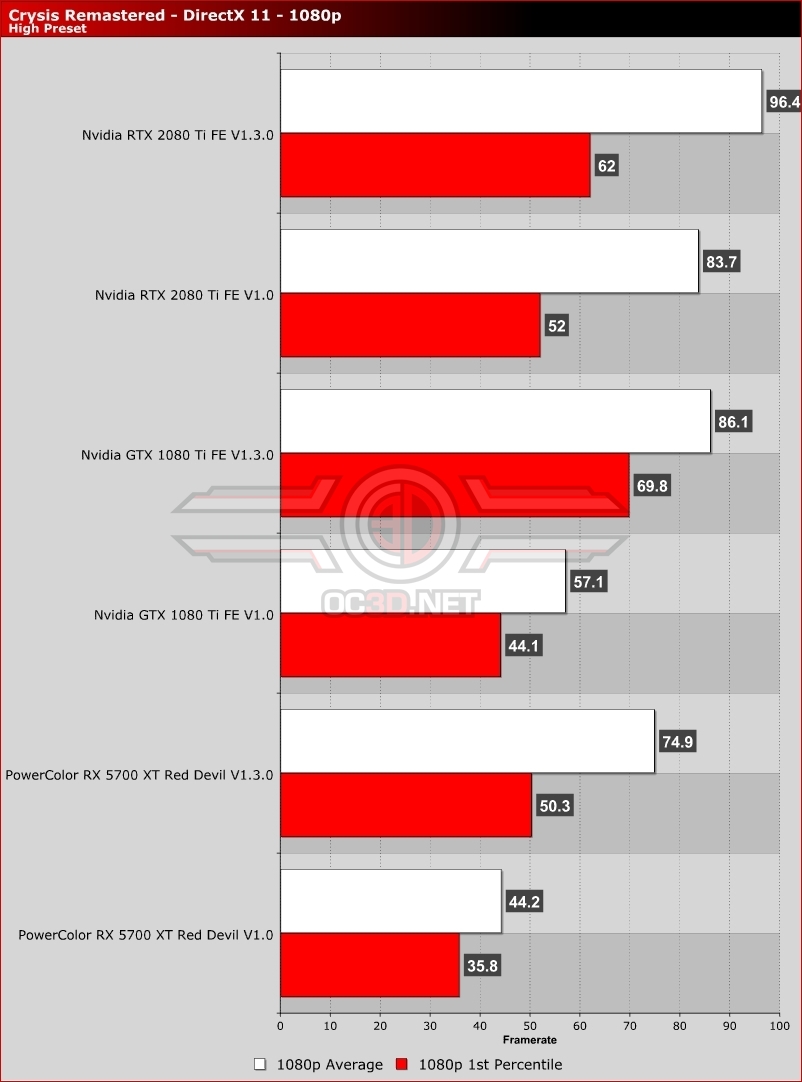 At 1440p, our RTX 2080 Ti extends its lead over Nvidia's GTX 1080 Ti with higher framerates in all areas. Here, hardware-accelerated ray tracing has a larger impact, and older graphics cards start to fall behind. 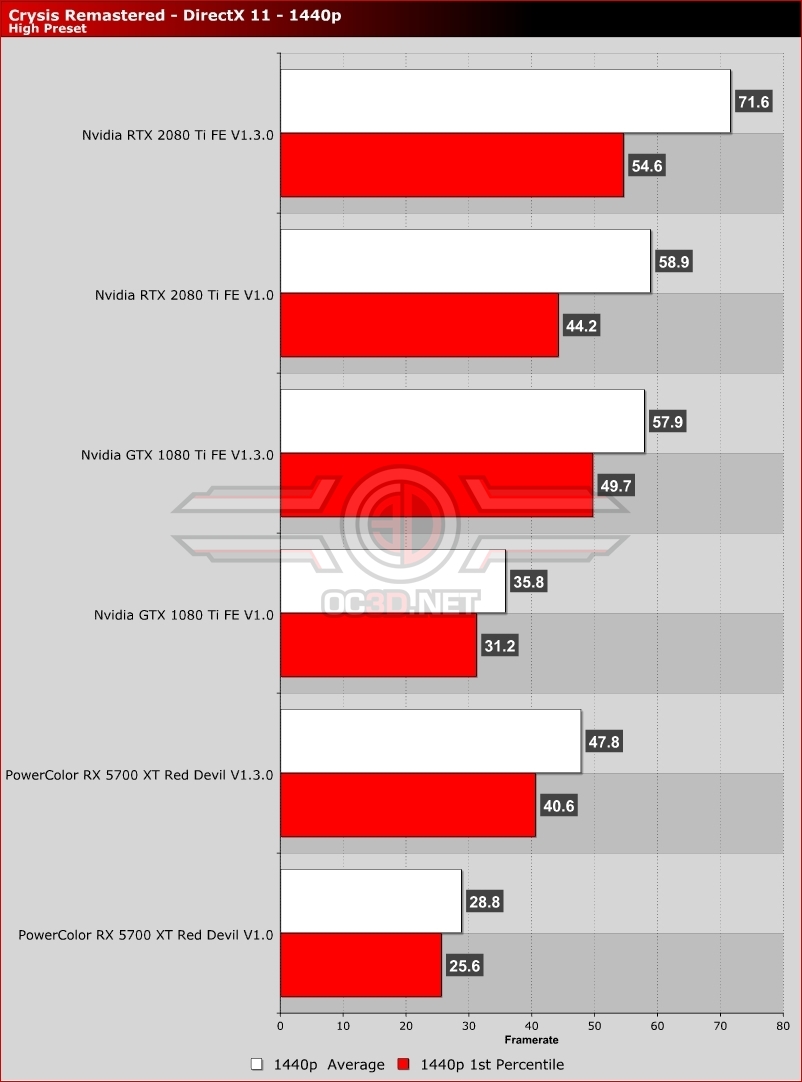 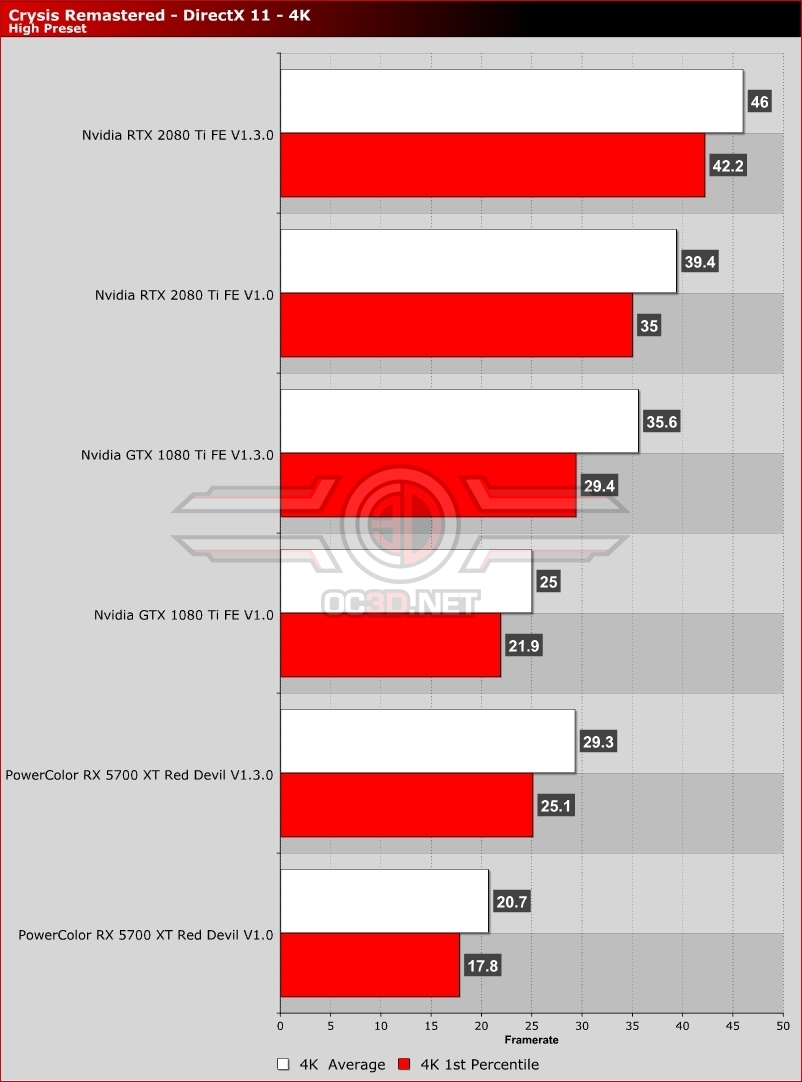 AngryGoldfish
Why on earth didn't they delay the release (everyone else does) until they had this patch ready? Did they need to use the public's systems as a beta for the game to find out what work needed doing? That's a huge performance uplift.Quote

AlienALX
So it's now fully playable at 1440p for me with the max settings.

Nice one Mark, thanks for putting the effort in mate !Quote

MiNo
I'm missing a evaluation of (any) games own performance - as in is it sloppy code or optimized code? This article puts much needed focus on it, but not enough.

I realize this harder to do than to slap a card in a build and watch a FPS counter but perhaps this is so easy (albeit time consuming) that there is room to get into the other parts?


Once in a while, yes there is a comment about poorly optimized game but I think it should be taken a big step further. As it is, the focus is always on the hardware, but as we already know the performance levels of the cards then we get too little out of the game performance reviews. Perhaps title is slightly better for team red .. so what? The interesting part would be to evaluate the games optimizations like it is being done for new hardware. It should not be a comment, it should be analyzed and ranked in table form. Obviously very difficult, but who better to do it than the crew here?


Sure it may fail, but it would be a chance of doing something new. And to put the pressure on sloppy coders just like the pressure is on the hardware builders when they cut corners or make poor design choices.

And in the end, optimizations in software tends to be much more important than hardware. Just look at the 'demoscene' to truly understand what is possible using optimized code.


Yes I do understand this is a hardware review site :-) But measuring HW performance without even considering the 'input' is missing a important part of the 'ecosystem' of performance.Quote

Dicehunter
Quote:
For the type of indepth detail you want would take way more time that it's worth for a review site mainly about the general performance of said hardware, There are places dedicated to this though, Digital Foundry being the main one who do get detailed information from game developers about various optimisations etc...Quote
Reply