So how does Cyberpunk 2077's patch 1.05 compare with the PC community's Hex Edit for Cyberpunk 2077 patch 1.04? The short answer is that both deliver similar performance numbers.

Patch 1.05 appears to be better than the community's Hex Edit in many cases, as it doesn't feature the same performance degradation as could be seen with the Hex edit when 12-core and 16-core Ryzen processors are used.

On top of this, patch 1.05 requires no hex editing or any additional modifications of Cyberpunk 2077's game code, making these Ryzen performance gains a lot more accessible to PC gamers. Most PC gamers will have their Steam, GOG, and Epic Games Store clients automatically update their Cyberpunk 2077 installation, giving many Ryzen users a hassle-free performance boost. 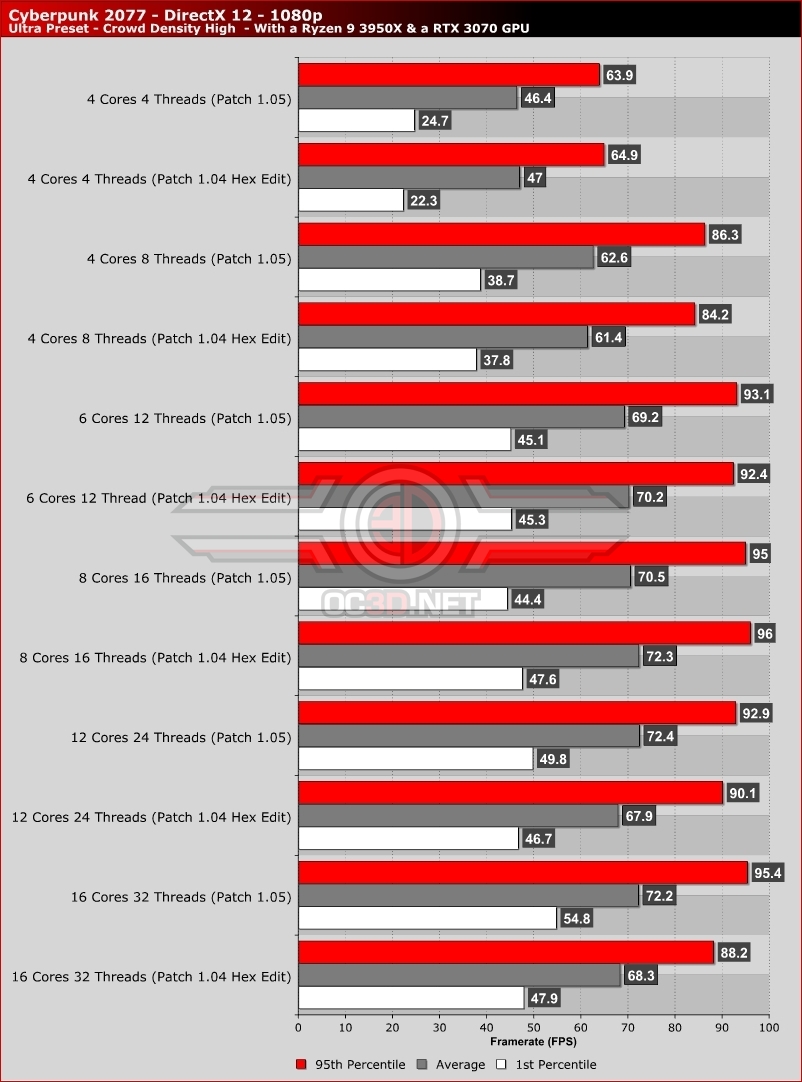 Cyberpunk 2077's patch 1.05 delivers users of AMD's SMT-enabled Ryzen processors some worthy performance gains, offering average framerate increases as high as 26.7% in some system configurations. This change will be transformative for users of 4-core/8-thread and 6-core/12-thread Ryzen CPU users and should deliver PC gamers a smoother overall experience within Cyberpunk 2077.

For those who want additional optimisation tips for Cyberpunk 2077, please look at our PC Performance Analysis and Optimisation Guide for the game.

You can join the discussion on Cyberpunk 2077's patch 1.05 and its impact on Ryzen's CPU performance on the OC3D Forums.

ET3D
How many times did you run this? Steve at Gamers Nexus said that he ran each test about 20 times, simply because there is quite a bit of variability.Quote

WYP
Quote:
How many times I run CPU tests depends on the game. I always ensure that windows updates are finished before any testing and only select benchmarking areas where I can achieve a high level of repeatability and highly consistent data.

Typically, CPU testing is conducted over three runs for each configuration. The data is then checked and repeated again if there are any outliers (which rarely happens). If you select a benchmarking scene where there is little variance run-to-run you won't need to benchmark 20 times for a single processor (assuming that is what you meant by 20 runs).

Before proper CPU testing, I typically run a scene 5-10 times in a row to be sure there is little run-to-run variability to start with. A well-selected test scene can eliminate the need for a crazy number of test runs.Quote
Reply