We are not happy just reporting on how this Hex edit impacts Cyberpunk 2077's performance; we also want to know why performance is changed. Thankfully, CapFrameX features logging tools which can be used to analyse the power consumption and thread utilisation of processor while benchmarking Cyberpunk 2077. 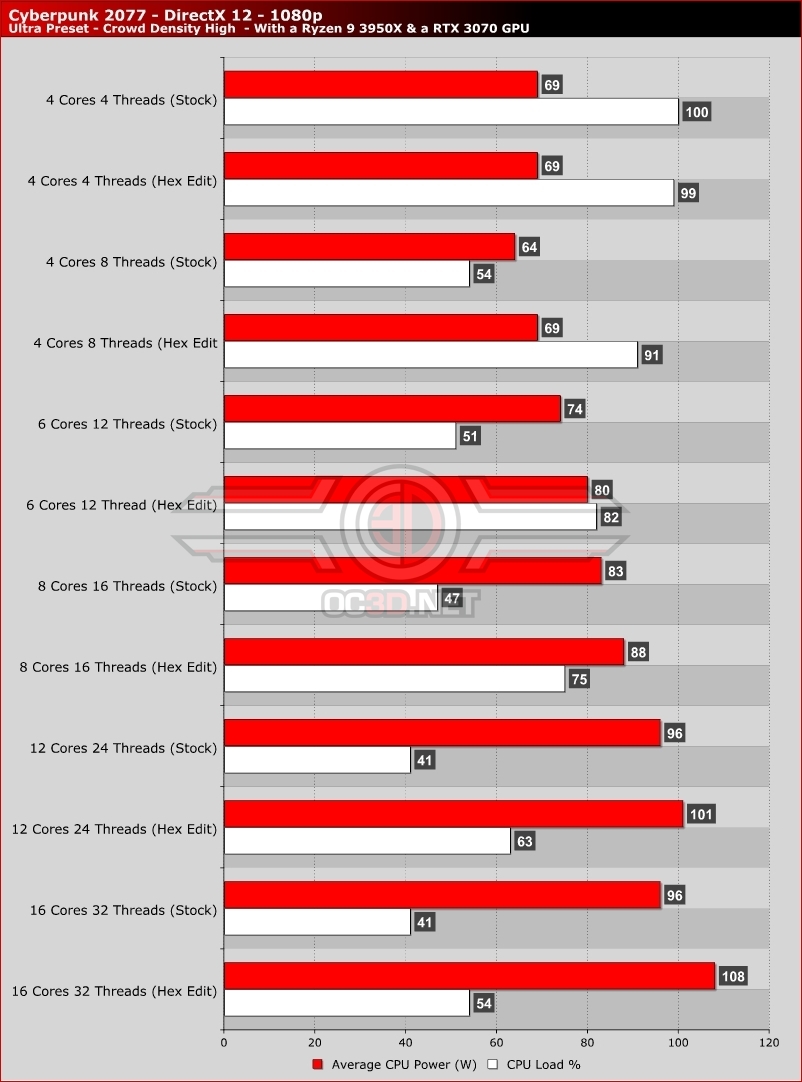 If you are not comfortable with editing your executables, CD Projekt Red will likely deliver their own CPU optimisations with future game patches. That said, it is unknown when an official Ryzen patch for Cyberpunk 2077 will be released.

You can join the discussion on Cyberpunk 2077's Ryzen Hex edit on the OC3D Forums.

Nerdfighter
Seems like 6C/12T or 8C/8T is the maximum the game can take advantage of. It would have been interesting to see sustained clockspeeds during testing, might be that once you get to 12 or 16 cores, loading fewer threads might allow for a slightly higher boost clock, which could explain the slight loss in performance using the hex edit.Quote

KingNosser
I was hoping for better, I'll let cdpr take care of it hardly seems worth it on 8/16 for me

NeverBackDown
Its pretty easy to do and quick. Free performance for likely a mass amount of people. Once the game updates it'll get its hex code reset anyway, which hopefully indicates CDPR improves CPU performance.

Thanks for the performance analysis, you got it done pretty quickly!Quote

ET3D
Thanks for investigating this.

Looks like a big boost for 4 and 6 core CPUs.Quote

Deadtroopers
What island of stupid are these people on? In five years your toppy top of the range HEDT will be a mid-range PC and your performance in triple A games will vary from nothing to right home about to dire. I could have made that statement at any for getting on for a couple of decades, I could probably have it carved on my headstone if I didn't think funeral practices are even more stupid.


Twice a year at least the main players will trot out roadmaps, and game developers act as if we are going to have, say it is 2015, 980Ti/5950 performance for the next ten years, let alone five.


I fell off my chair laughing at this comment on some site discussing evolution: God is a game coder. That is how derp this is when you can compare the most stupid character in all fiction to the poltroons that code games.Quote
Reply