The PC version of Destiny comes with a lot of detailed graphical options, including several solutions for Anti-Aliasing. The game can easily be adjusted to suit the users, whether they want high levels of graphical fidelity, high framerates or both depending on their hardware configuration.

Sadly since the game's beta release Bungie has decided to ditch the MSAA option that was included in the beta, though given the huge performance impact of the feature we can see exactly why. Bungie has stated that the MSAA implementation that they were using was having a strange effect on the game's differed renderer, messing with some of the game's other graphical options somewhat.

Below is a list of all available graphics options on Destiny 2's PC release. The PC version also includes a VRAM usage tool to let users know how much VRAM the game is using. In our testing, our VRAM usage never went above 4GB on our GTX 1080, even at 4K on the Highest graphical preset, easily scaling down to below 2GB for older GPU hardware.

Thankfully options like Film Grain and Chromatic Aberration can be turned off in the game's graphical options menu, with the game's FOV being easily adjustable between 55 degrees and 105 degrees.

One other thing to note is that the PC version of the game features a default FOV of 85 degrees, which is wider than the FOV of both the PS4 and Xbox One versions of the game, which are both around 70 degrees. 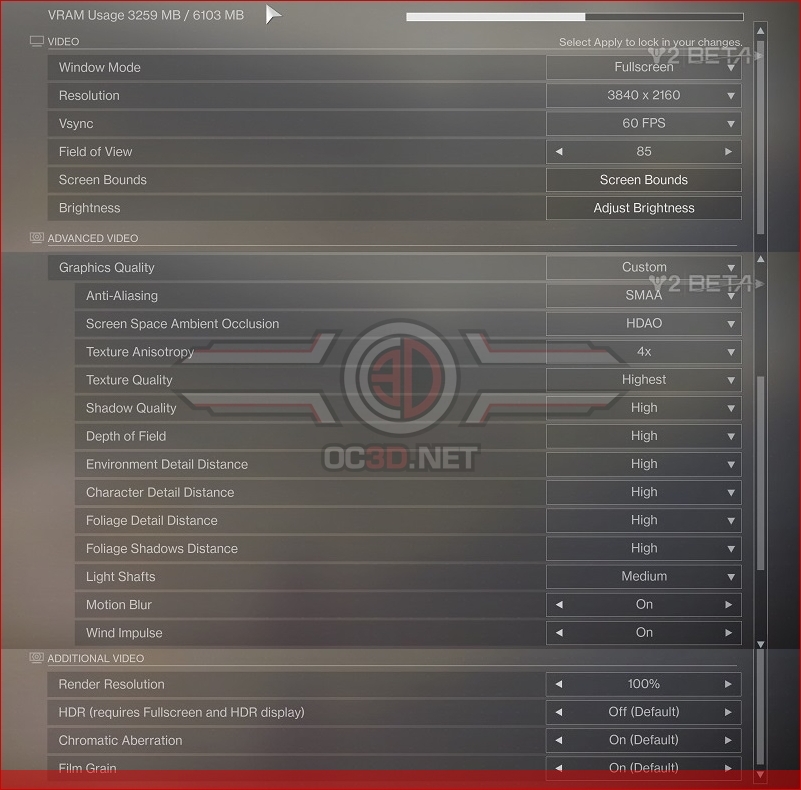 The first thing that PC gamers should do when setting up their system for Destiny 2 is to first see which graphical preset provides them with the performance that they desire on their system, but then to make some customisations to enhance the game's graphics further.

Texture Anistrophy is an imortant feature when looking at distant flat textures, making it a worthwhile upgrade and anyone using a GPU with 4GB of VRAM or higher should immediately use the game's Highest Texture settings. Moving from High to Highest will only offer a minimal graphical imporvement, so we recomend that users drop down to high if they are having any issues running the game at its highest settings, though moving to highest textures and 16x Anisptrophic filtering will offer a notable bump to the game's graphical quality without a huge performance impact.

All of the controls in Destiny 2 can be rebound on PC, allowing PC users to easily configure the game's controls to their liking. Aim Smoothing is turned on within the game by default, so PC users may want to disable this option if they want more precise mouse control.

Destiny 2 will not support FPS overlays and other similar tools on PC, with Bungie taking measures to prevent code-injection into the game as an anti-cheating measure. This will prevent FPS overlay tools like MSI Afterburner, FRAPS and some streaming tools from functioning properly. Bungie has worked to ensure that certain tools are compatible, such as AMD ReLive and Nvidia's Geforce Experience. This design choice will no doubt annoy a lot of gamers, especially those that enjoy looking at performance metrics.

In the game's Gameplay Options, Destiny 2 players can enable a FPS Display, which will display the game's current framerate at the top right hand corner of the screen.