When comparing AMD's RX 480 to Nvidia's GTX 1060 (both ASUS Strix models) we can see that the performance comparison offers a mixed bag performance-wise, with AMD's RX 480 winning out at 1440p Highest settings while the Nvidia system achieves the most performance at all of the game's lower graphical presets.

It seems clear that AMD has chosen to optimize their game drivers for Destiny 2's highest graphical preset, where AMD's GPUs fared quite badly in the game's beta, which could be the reason why AMD's performance is better than Nvidia when using this preset. When looking at our other tests we can also see that AMD's hardware works best when playing the game at higher resolutions, at least when compared to their Nvidia counterparts, offering some strange performance results.

On both the GTX 1060 and RX 480 we were able to achieve framerates with averages of around 70FPS at 1440p high settings, which allows the game to be played at over 60FPS most of the time. Our benchmark scenario was in on of the most demanding areas of the game that we could find, which means that more often than not your framerates will be much higher than this when using the same hardware.

If you look at our graphical comparison images on the previous two pages you can see that there is not much of a visual difference between Destiny 2's High and Highest visual presets, with the difference being almost extremely difficult to notice outside of a side-by-side comparison, making the downgrade to High settings one that can be easily stomached for most users if they encounter performance issues. Beyond that most users using high settings will be able to upgrade to the game#s highest textures and 16x Anisotropic filtering without much of an issue. 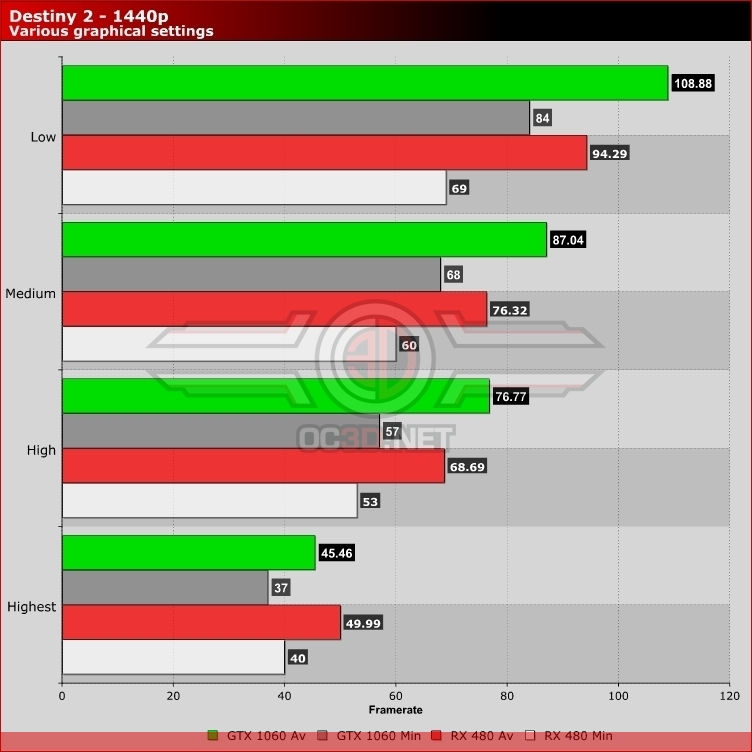