CPU Performance - Ryzen & Intel - How many cores does Destiny 2 require?

CPU Performance - Ryzen & Intel - How many cores does Destiny 2 require?

On the CPU front, Destiny 2 is not is not an overly demanding title, playing at over 60FPS at all times on most of our CPU core configurations on both AMD Ryzen and Intel Broadwell-E.

When compared to the beta we can see that Bungie has placed a lot of effort into improving their game's CPU performance on AMD Ryzen-based setups, giving AMD performance that is roughly equal to their Intel counterparts in most cases when both CPUs are running at the same clock speeds.

Strangely we have found that Intel CPUs still suffer from some minor performance losses when using hyperthreading, at least when using a four core/thread configuration, though with AMD this opposite is true. Regardless, the performance difference is fairly minor in this case, especially when both offer an almost identical minimum framerate.

The only time when we see a huge drop in game performance is when we move to a dual-core setup, with this use case being the only time where we can get the game to run at under 60FPS on our GTX 1080 at 1080p Highest settings.

Destiny 2 performs best with higher core counts, though like most games CPU clock speeds are also an important factor. 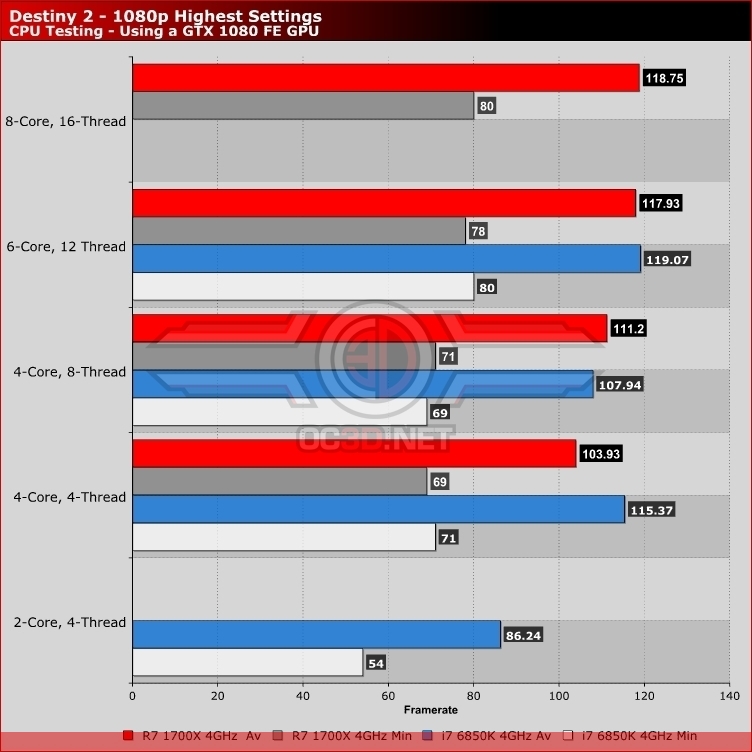