Sony has started to experiment with the PC platform, offering some of its first-party games to players outside of PlayStation platforms. Earlier this year, Sony brought Predator Hunting Grounds to PC alongside PlayStation 4, and now Horizon Zero Dawn, a PS4 classic, is available on PC.

With Death Stranding's PC release last month, high expectations were set for Horizon Zero Dawn. Kojima Production's based Death Stranding on Guerilla Games' Decima Engine, and it was an excellent console-to-PC conversion. If you need evidence of this, you need only read our PC Performance review for Death Stranding.

With Guerilla Games' Horizon Zero Dawn sharing the same engine, it only seems logical that Horizon Dawn would also have a top-tier PC conversion, right? In this analysis, we will be looking at Horizon Zero Dawn's PC version, its shortcomings and how PC gamers can get the most out of the title. We have optimisation tips, broken features and plenty of other things to talk about, so let's get started.

At OC3D, we don't take a fast and loose approach to games testing. When a game includes a built-in benchmark, we always check to see if it can match real gameplay and if it can accurately simulate the most demanding areas of the game that it's designed to simulate.

In the case of Horizon Zero Dawn, we found that its benchmark offered similar performance levels to the title's opening areas. However, later sections of the game ramp up the title's world complexity, creature counts and overall hardware demands. This allows us to frequently see lower framerates in outdoor areas of the game, both inside and outside of combat. 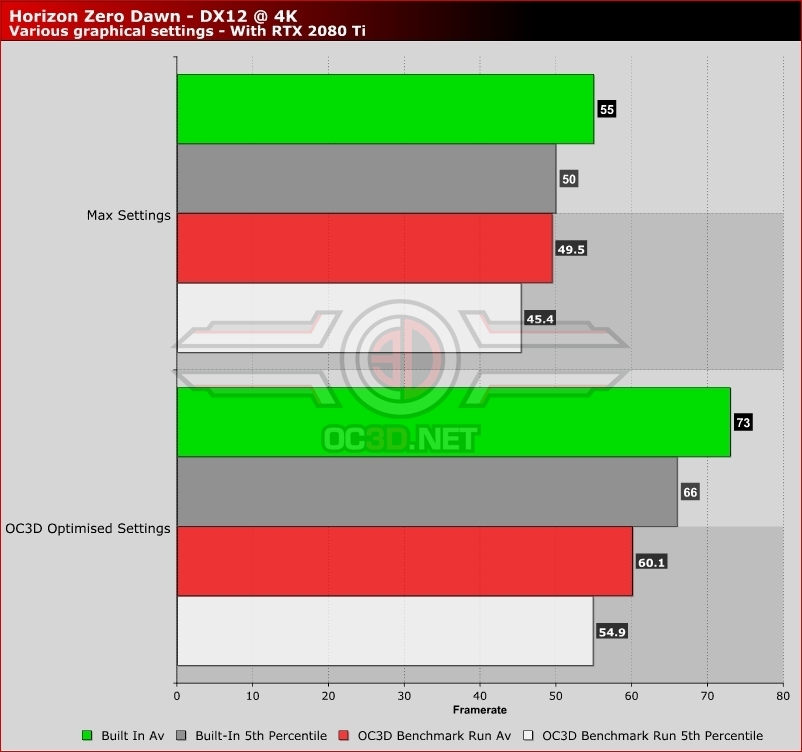 When testing Horizon Zero Dawn's PC version, we opted to use the newest drivers from both the Radeon and Geforce camps. These drivers are AMD's Radeon Software Adrenalin Edition 20.8.1 driver as well as Nvidia's Geforce 451.85 HotFix driver.

OC3D is a website that is dedicated to PC hardware, so you better believe that we test every game on a wide range of hardware configurations. This commitment to variety means that we will be using both Intel and AMD based testbeds as well as a range of GPU offerings from both Nvidia and Radeon. Our primary test system uses Intel's X99 platform, containing an Intel Core i7 6900K at a fixed clock speed of 4GHz. This testbed will use 16GB of Corsair Vengeance DDR4 memory and will be powered and cooled by an HX1200i PSU and an H110i AIO liquid cooler respectively, with everything sitting inside a Corsair 460X chassis. In this system, we are using an ASUS Strix X99 motherboard.The system below will be used to conduct the majority of our game testing. This system will be used in this review unless otherwise stated.Within the next few weeks, OC3D will be transitioning to a new games test system. We will update you on the specifications and performance of this test system in an upcoming article.

No gaming test suite would be complete without a large selection of GPUs. At OC3D our current test suite covers Nvidia's RTX 20-series and GTX 10-series alongside AMD's RX Vega and RX 500 series graphics cards.Starting with Metro Exodus, we began testing new PC games with Nvidia's latest RTX series of graphics cards. In our testing, we currently use the mid-range RTX 2060 and uber high-end RTX 2080 Ti entering our graphics card lineup. In time we hope to have a Radeon RX 5700 graphics card for RTX 2060 VS RX 5700 comparisons. With this performance analysis, OC3D's main review staff has been able to work together from across the UK to deliver wider levels of performance testing than is common for our gaming content. This has enabled us to add a wider range of GPUs to our test suite for this review. Radeon RX 5700 Series - Navi (RDNA)- Powercolor Radeon RX 5700 XT Red Devil - Powercolor Radeon RX 5700 Red Devil