Our benchmark scene comes from the Caspian section of the Metro Exodus campaign, running through a difficult area of the level (GPU-wise) as well as several more average scenes. With this in mind, our minimums should be considered amongst the worst that the early game can offer and our average should be seen as, well, an average. Most of Metro Exodus will be played at framerates that are around or exceed our average, but more demanding areas will crop up from time to time. We did not use Metro's built-in benchmark for our testing.

At 1440p we can see why 4A Games recommends powerful GPUs like the GTX 1080 Ti and RTX 2070 and AMD Radeon Vega 64 for this resolution. Everything under the RTX 2080 Ti cannot stay above 60FPS in our test run. Turning off Tessellation and lowering the game's resolution scaler a little will alleviate this issue a little, making the game more than playable at mostly 60+ FPS on the RTX 2060, GTX 1080 and RX Vega 56 on a 1440p screen.

The RX 580 and GTX 1060 should stay at over 30 FPS with Tesselation turned off, giving PC players the option to lock the game at a console-like 30FPS. At this refresh rate, we recommend turning Motion Blur down to low, as high motion blur and low refresh rates do not mix well in Metro. 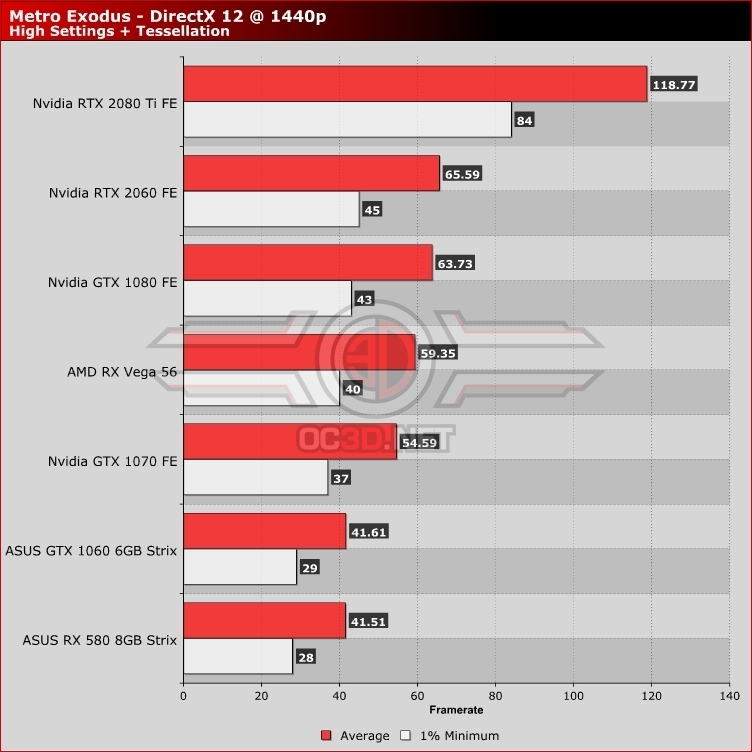