Our benchmark scene comes from the Caspian section of the Metro Exodus campaign, running through a difficult area of the level (GPU-wise) as well as several more average scenes. With this in mind, our minimums should be considered amongst the worst that the early game can offer and our average should be seen as, well, an average. Most of Metro Exodus will be played at framerates that are around or exceed our average, but more demanding areas will crop up from time to time. We did not use Metro's built-in benchmark for our testing.

At 4K even the RTX 2080 Ti fails to stay over 60FPS at all times in ur test area, though the graphics card can offer 4K 60+ FPS in most locations within the game. Disabling Tessellation will achieve a solid 60+ FPS in almost all situations, though we'd imagine that a fair few RTX 2080 Ti uses would prefer to use DLSS and enable Ray Tracing to maintain mostly 60+ FPS.

All of the other graphics cards that we tested at this resolution failed to maintain 30+ FPS framerates during our testing, which means that these GPUs need both reduced settings and a significant reduction in resolution scale to reach anything close to 60FPS on a 4K screen. 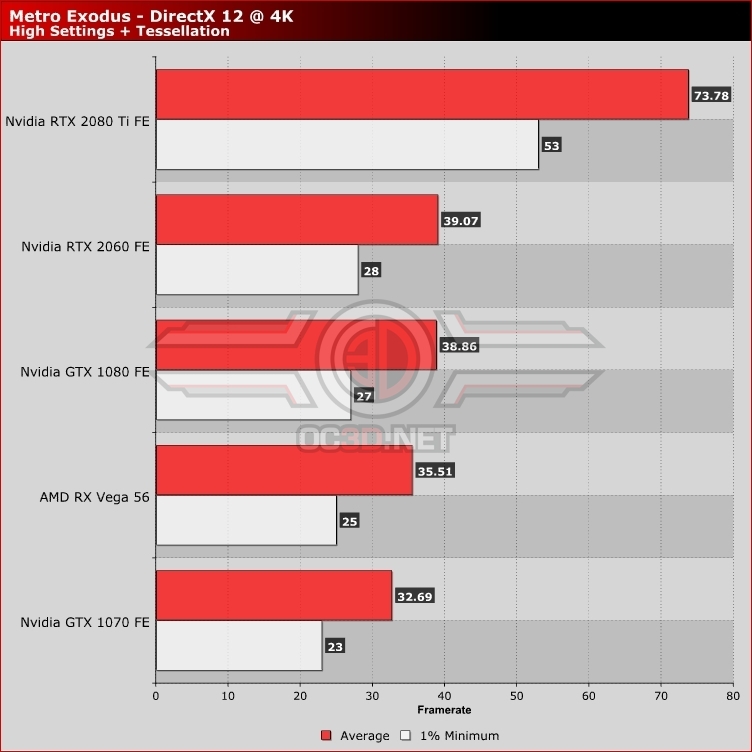