In late January, 4A Games released Metro Exodus' full PC system requirements, detailing the kind of hardware that would be needed to run Metro exodus as high framerates on PC.

In this review, we will be testing a lot of the hardware mentioned within this requirements list, which will allow us to judge whether or not A4 Games' claims are true. However, it is worth noting that both Nvidia and AMD have not released a day-1 driver for Metro when we conducted our initial testing, so things may change with future driver updates. 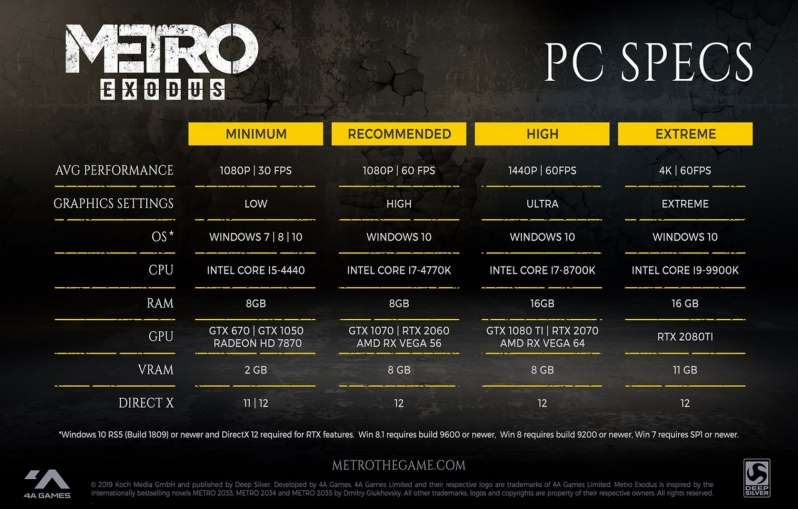 While testing Metro we utilised game-specific drivers from both AMD and Nvidia, utilising the Radeon Software 19.2.1 driver and Geforce 417.71 driver in the applicable graphics cards from each vendor.

Neither Nvidia or AMD have released an optimised drivers for Metro Exodus at the time of writing. This will likely change before the game's launch on February 15th.

OC3D is a website that is dedicated PC hardware, so you better believe that we test every game on a wide range of hardware configurations. This commitment to variety means that we will be using both Intel and AMD based testbeds as well as a range of GPU offerings from both Nvidia and Radeon. Our primary test system uses Intel's X99 platform, containing an Intel Core i7 6850K at a fixed clock speed of 4GHz. This testbed will use 32GB of Corsair Vengeance DDR4 memory and will be powered and cooled by an HX1200i PSU and an H110i AIO liquid cooler respectively, with everything sitting inside a Corsair 460X chassis. In this system, we are using an ASUS Strix X99 motherboard.

Aside from our standard X99 test system we also have a testbed based on AMD's Ryzen 7 1700X CPU, which will sit at a clock speed of 4GHz be housed in an ASUS Crosshair VI Hero motherboard. This system will use Corsair's 3200MHz Vengeance White LED memory and is contained inside another Corsair 460X chassis. This extra system will allow us to see if any games offer a performance advantage to AMD's Ryzen or Intel's Core series processors.

No gaming test suite would be complete without a large selection of GPUs, which in this case covers Nvidia's RTX 20-series GTX 10-series and 9-series and AMD's RX Vega, RX 400 and R9 300 series graphics cards. We have replaced our RX 480 GPU with its RX 580 equivalent, giving us a fairer comparison point between AMD/Nvidia's modern graphics card lineups. Starting with Metro Exodus, we will be testing new PC games with Nvidia's latest RTX series of graphics cards, with the mid-range RTX 2060 and high-end RTX 2080 Ti entering our graphics card lineup.