- Update - The Quality of DLSS in Metro Exodus has greatly improved after the game's February 21st patch. Our thoughts and several image quality comparisons for DLSS are available to read here.

Nvidia's DLSS technology promises a lot, TAA quality, or better, Anti Aliasing and much higher performance levels. That claim is a lot of live up to, as we were excited to see how well Nvidia's latest technology worked out in action.

We will preface this by saying two things, first, that we are using Nvidia's 417.71 WHQL driver, the driver that Nvidia told us to use during our initial testing. Nvidia's newer 418.81 driver is said to feature a bug which impacts Metro Exodus' RTX Ray Tracing. During our time testing Metro Exodus, Nvidia's Game Ready driver for the game was not release.

With this in mind, we will note that Nvidia's DLSS algorithm may change before Metro Exodus is released on February 15th. Nvidia's Deep Learning Supercomputer is working hard to improve the quality and performance of DLSS, so we can expect DLSS to get better over time.

Now that that's out of the way, we can get down to the core of the situation, as while DLSS can boost Metro Exodus' framerate, we noticed that this also came with a slight blurring effect which we noticed during gameplay.

We will note that our games tester currently uses a 43-inch 4K screen to test PC games; so the blurring effect will be much less noticeable when using smaller screen sizes. Whether or not this reduction in sharpness is worth the performance increases offered by DLSS will be up to you, the player, but we noticed this pretty much as soon as we started using DLSS on our 4K 43-inch screen.

The comparison below showcases a 1:1-pixel representation of the graphical change, but note that an 800x450 image is less than one-twentieth of a 4K screen, so this could be called an extreme example. We retested this several times and got the same results.

The full 4K screenshots that were used to make the slide below are available to view here. These screenshots were captured using an RTX 2080 Ti with MSI afterburner. This graphical change was further confirmed by our tester, who could clearly see the difference in gameplay.

Please note that we plan to test the visual and performance impact of DLSS again when we receive Nvidia's Game Ready driver for Metro Exodus. Nvidia's DLSS algorithm may pack improvements in their latest driver release.

(DLSS Off VS DLSS On (Click to See Full Size Version)) 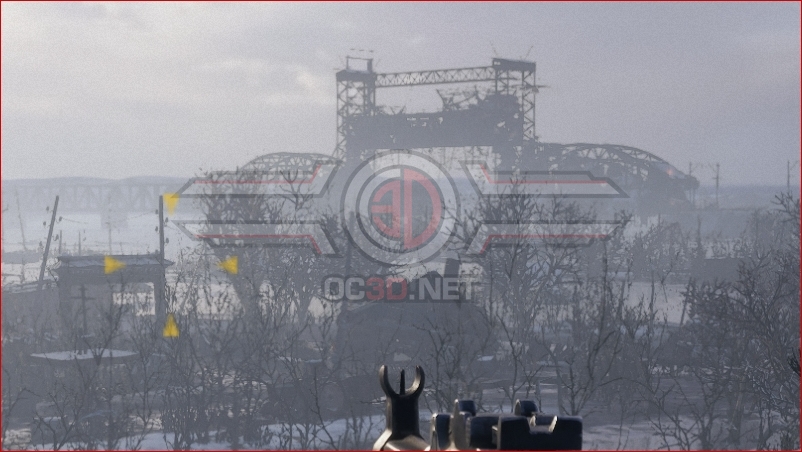 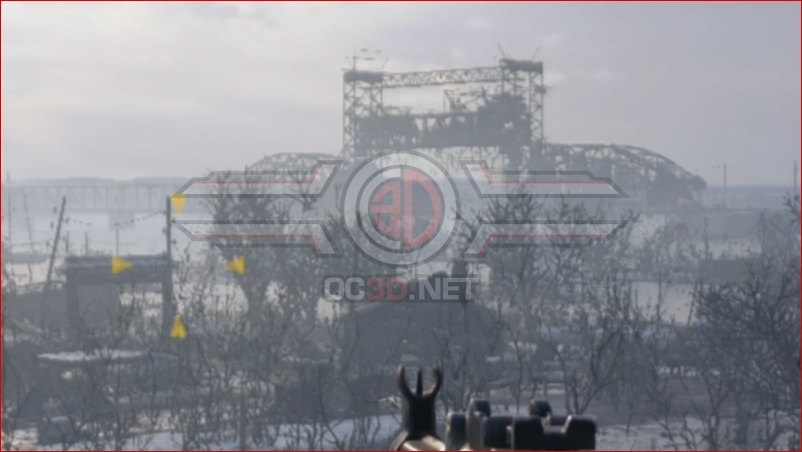 When testing Nvidia's RTX 2060 graphics card we noticed a similar phenomenon when using DLSS at 1080p. The screenshot below showcases a similar 800x450 sample of a 1080p image with and without DLSS. This screenshot is of Metro's main menu.

800x450 is around a sixth of a 1080p screen's pixel count, making the visual difference fairly noticeable.

(DLSS Off VS DLSS On (Click To See Full Sized Version)) 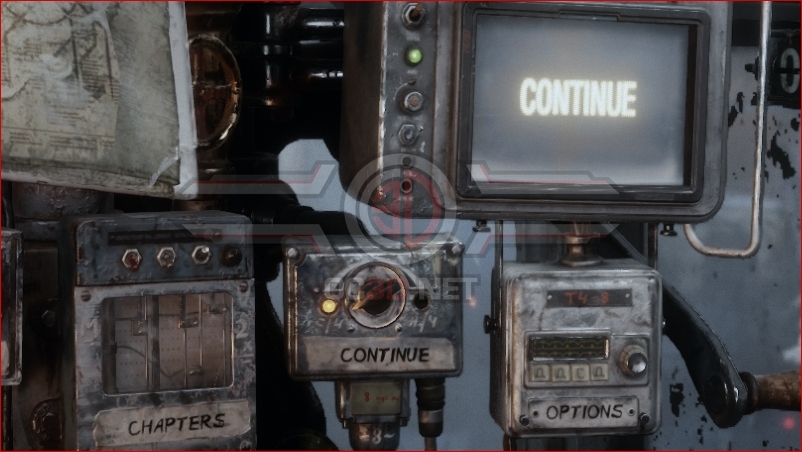 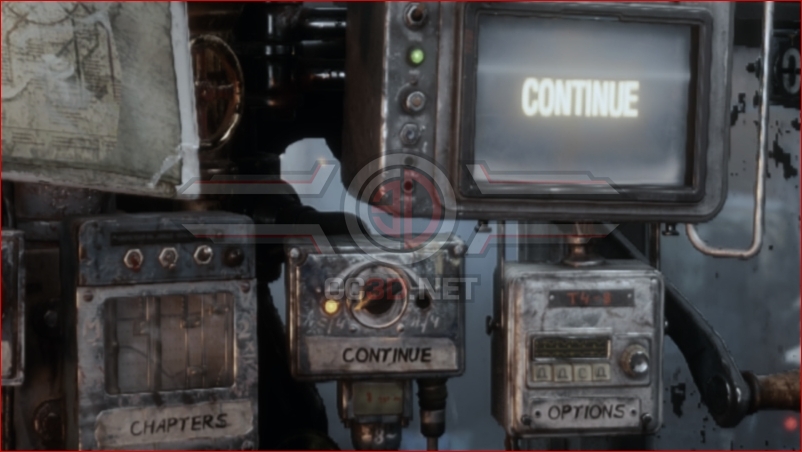 When using DLSS without Ray Tracing we noticed some strange results, with the RTX 2060 offering lower average framerates and a tiny increase in minimum framerate. At 1440p we can see a larger increase in framerate, boosting the game's minimum framerate from 45 to 52, which is a notable increase.

With the RTX 2080 Ti we can see the best results at 4K, where we see a 13FPS boost in the game's minimum framerate, which equates to a boost of approximately 25%.

Strangely, we were unable to get DLSS to activate on the RTX 2060 at 4K and we were not able to get DLSS to work with the RTX 2080 Ti at 1080p or at 1440p without Ray Tracing also being active. This could change with newer Nvidia drivers or new game updates. Larger performance boosts are possible when using high graphical settings, which you will see on the next page. 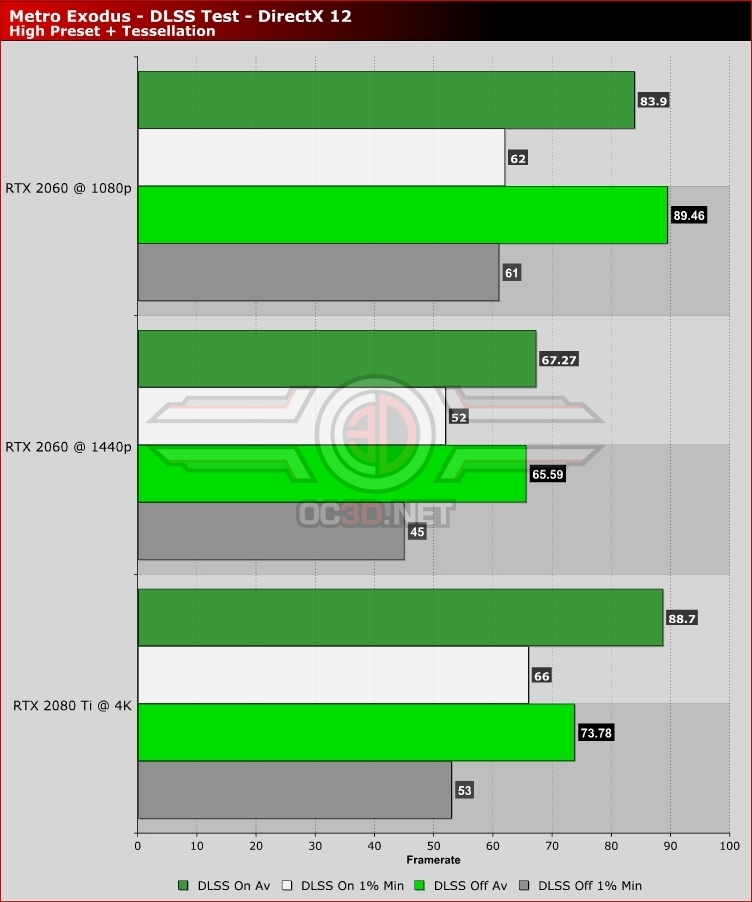