Even with our customised/optimised graphical settings, which we discussed on page 6, it is obvious that Monster Hunter: World remains an extremely demanding title on PC, requiring either a Nvidia GTX 1070 or a Radeon RX Vega 56 to achieve steady 60+ FPS framerates at 1080p.

With further settings adjustments, both our RX 580 and GTX 1060 graphics cards can achieve steady 60+ FPS framerates at 1080p, but not without visual sacrifices. This could be done using a variety of graphical changes, from reductions in shadow quality and ambient occlusion quality to more extreme measures such as resolution scaling tweaks and LOD bias adjustments.

Moving down to our GTX 960 and R9 380 graphics cards, settings changes will be required to allow both cards to offer stable 30+ FPS gameplay. Both cards can easily play Monster Hunter: World at 1080p 30FPS with a few tweaks, though a 30FPS experience on PC will be a difficult pill to swallow for some users, especially if they use a keyboard/mouse setup over a gamepad, which is typically more forgiving at low framerates.

When looking at our two test areas, we can see a trend across AMD and Nvidia graphics cards, something that is highlighted with the Radeon RX Vega 56. We can see that in both test areas that the RX Vega 56 surpasses the GTX 1070 when it comes to average framerate, but we can also see that in our second scene that the RX Vega 56's minimum framerate can dip below the GTX 1070's minimum. This reveals the scene dependancy of AMD VS Nvidia performance, making neither brand a clear-cut winner over the other.

Given the hardware demands of Monster Hunter: World PC gamers need to temper their visuals expectations when using older, or lower end hardware to play this title. Graphical settings will need to be compromised to achieve 60FPS framerates, though it also must be remembered that Monster Hunter's highest LOD settings are reserved only for the game's "graphics mode" on the PS4 Pro and Xbox One X. 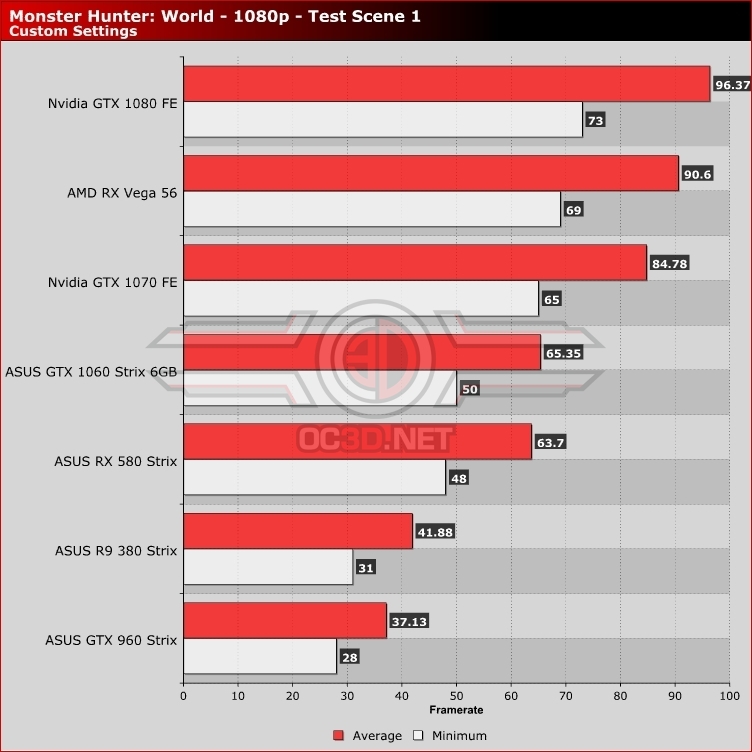 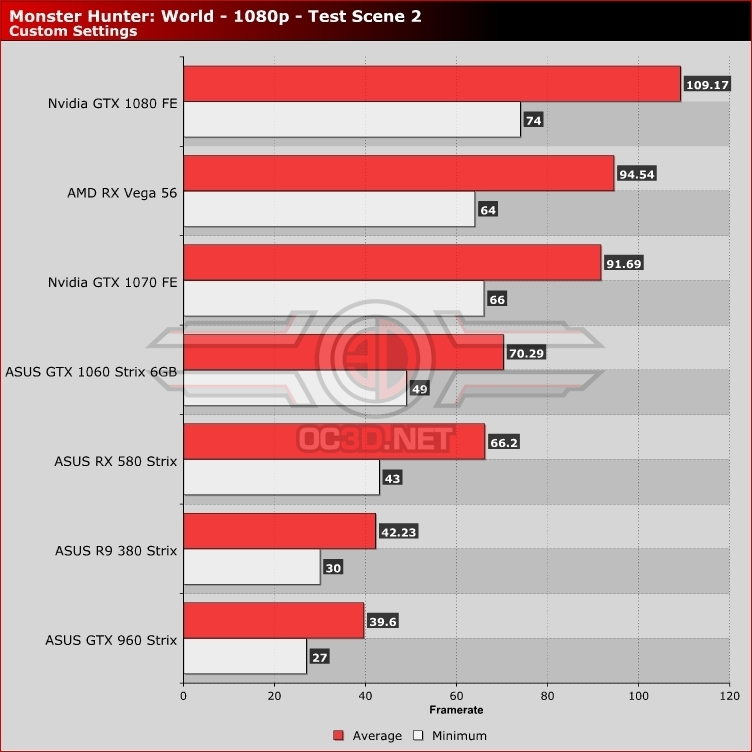 Dicehunter
Great review, I'm enjoying MHW so far but I hope Capcom patch in 21:9 support and don't just leave it to the modders like they did with RE7.

I did my own performance vid showing stats on an 8700K and Titan Xp maxed at 1440P, While the game is pretty IMO it doesn't justify the amount of resources it takes to run maxed out.

SolarNova
It would be helpfull if reviewers called out developers when issues are clearly there.


I have MHW on PC, and i love the MH series, but MHW is a poorly optimised mess.


Mouse controllers are horrible, more akin to a anolog stick emulator than direct mouse input. Though tbh its a game thats always been designed for controller, that still doesnt excuse Capcom for such poor mouse implimentation.


There is currently massive issue with group play and disconnects.


And the performance is terrible for the visual quality it has.
Any1 with anything less than a 1070 has to run ether lowered LOD settings and/or use dynamic resolution to get acceptable PC gaming FPS, or deal with sub 60 gamplay down to the 30's.... at 1080p !


Imagin my disgust when a 780 classifed running 1300 mhz core, generaly considered perfectly fine for 1080p gaming along with 970' and 1060's, has to resort to sub 1080p rendering and short culling distances (from lowered LOD settings) just to maintain clsoe to 60 fps at 1080p.

Personaly i cant put up with the horrible visuals that entails, so im dealing with 30-50 FPS gaming atm, it feels sluggish and isnt as enjoyable as the game should be becouse of it.


Now apart from you not directly calling this out more ..there is one other thing that stuck out to me. You mention that you recommend TAA ?! ..seriously? ..the game's TAA implementation is blurry AF, and it only has the option of TAA or FXAA, nether is great , but TAA is by far the worst.


Oh, and your using the wrong Nvida drivers, the latest ones actualy hurt performance according to alto of users. though i didnt gain as much as some users, i did gain 4 FPS from droping down to the older 398.36 drivers.

I dont mean to bite your head of, but it would be much more helpfull if as many reviewers and website as possible call out Capcom on this so that it gets fixed. Overlooking it or paiting a "oh its ok, its not THAT bad" picture doesnt help.

Take a moment to look through the steam community forum, yes its rather toxic and full of trolls, but there are plenty of legitimate issue being brought up, not least of which is the performance.

Dicehunter
Quote:
Trouble with the Steam forums is there are a lot of idiots and nutjobs on there that defend poor optimisation, Low res textures and generally what is a sloppy port.

Davva2004
The best way to make developers take note is to request refunds if the game doesn't run properly. Hit them in the pocket and things happen. Look at Arkham Knight as an example.Quote

WYP
Quote:
When it comes to PC ports of console games, the big question is how good console performance is and can PC do better.

As I mentioned in the review, the game runs at 20-30FPS in most areas on PS4 and Xbox One, with even the Pro consoles getting far from 60FPS in their respective performance modes.

Many of the game's highest settings come from the "graphics mode" for Xbox One X, which are designed to run at around 30FPS+ at 1080p with the game's high draw distances etc. Consider that Xbox One X levels of GPU performance are close to that of an RX 580. Keep that in mind when considering the game's hardware requirements for 60FPS at these settings.

As far as TAA goes, it depends on what kind of look you are going for. I prefer to have less aliasing, which is worth the "blur". TAA is computationally cheap and gets the job done, plenty of PC gamers are more distracted by aliasing than TAA/FXAA "blur", though I will agree that it comes down to personal preference. The age old "motion blur" debate also comes to mind here.

When it comes to drivers, I will re-install an older version and see how it impacts the GTX 1080, though this sounds like a case of Nvidia not optimising for older Geforce hardware than anything else. I will report back on this later.

As far as "unoptimised" claims go, what I will say is that people need to consider how a console version behaves before saying that the PC version has a god given right to run at 60FPS at max settings. When considering the console performance, Monster Hunter: World was always going to be a performance hog on PC.

Could Capcom do better? Of course they can do better, but that doesn't mean that I expect a PC version of a game to get more out of the equivalent hardware than the game's console counterpart.

I am hearing that online play is an issue with some PC players, though I can't say that I have been disconnected yet. I don't make a habit of muddying my own conclusions with the thoughts of the Steam forums.

Apologies for the overly long post, I hope it sheds a little more light on my perspective.Quote
Reply