NieR Automata's BECOME AS GODS Edition for PC is a gamechanger. No longer will PC gamers be forced to mod the game to achieve what should be standard functions.

Before adding NieR Automata to Xbox Game Pass for PC, Microsoft, Square Enix and QLOC addressed the game's major issues on PC, its stutters, resolution issues and other performance issues. Sadly, this is a port and not a remaster, so many of the issues present in the original PC/console versions remain.

As it stands, the Microsoft Store/Xbox Game Pass for PC version of NieR: Automata is the best download and play version of NieR Automata on the market, but that does not mean that the game's BECOME AS GODS Edition is perfect.

The BECOME AS GODS Edition of NieR Automata is a port, not a remaster, so the game's visuals are still marred by low-resolution textures and low-resolution framerate (900p/30FPS) cutscenes. While distracting, these issues are present within all versions of NieR Automata and are not something that we expected to be addressed with a surprise PC port of the game.

We have also noted that NieR Automata's Anti-Aliasing and Ambient Occlusion settings are incompatible, causing jarring draw-in transitions as new LODs load for the game. This issue is present within the original PC version of NieR Automata, and it has not been fixed for this new release of the game on Xbox Game Pass. 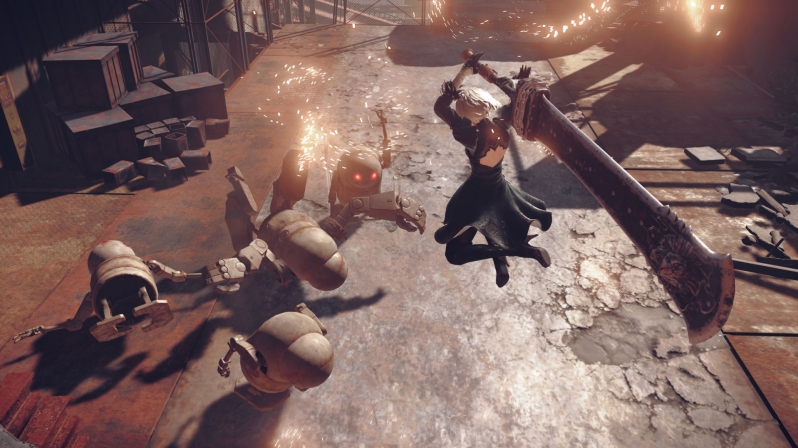 Those who are playing NieR: Automata BECOME AS GODS Edition on PC should first lower the game's anti-aliasing if they want to increase the game's framerate. This is the fastest and easiest way to give the game more GPU headroom. If using the game's Anti-Aliasing (MSAA) options, you should disable the game's Ambient Occlusion setting to create less jarring LOD transition effects.

NieR: Automata BECOME AS GODS Edition gets the basics right, and while the game is far from perfect on PC, it is workable, and that is good enough for PC gamers. The original PC version of NieR: Automata was not good enough for Xbox Game Pass for PC, and Square Enix should be ashamed of that.

What's more damning for Square Enix is that they have not updated the Steam version to address the game's longstanding issues on PC. A better version of NieR Automata is available on PC, and Square Enix should give NieR Automata's Steam users access to it. There is no excuse for the PC version of a 2017 game lacking basic features like proper resolution support.

What's good about NieR: Automata BECOME AS GODS Edition is that it provides PC gamers with a great download-to-gaming experience. Nobody wants to download a new game to find out that it doesn't offer support for basic PC features. Yes, mods can address these issues, but gamers should not have to do that kind of work to get basic features from such a recent PC release.

Right now, modding the Steam version of NieR Automata delivers the best PC possible PC experience, but those who are not looking to mod the game will have a good experience with Xbox Game Pass, assuming that they avoid mixing MSAA with Ambient Occlusion.

You can join the discussion on NieR: Automata BECOME AS GODS Edition on the OC3D Forums.