When looking at our 1080p results one thing is clear, GPUs with less 4GB or less VRAM are suffering from some performance issues. If you skip over to our VRAM usage page it becomes clear that Wolfenstein II is a very VRAM intensive game, especially at the game's Mien Leben! preset, requiring over 5GB of RAM to run at 1080p.

We have already shown that our two 2GB graphics cards, the R9 380 and GTX 960 are both capable of playing this game at 1080p at low settings (no AA) with reasonable framerates and we can say here that the R9 Fury X can easily run this game at over 60FPS when the game is scaled back to better suit the GPU's 4GB frame buffer.

Even without Async compute (full explanation in the previous page) the RX 480 Strix offer performance that is closer to the GTX 1070 than the GTX 1060, showcasing how well optimised this game is for AMD Radeon hardware, leaving us annoyed at out lack of RX Vega GPU samples to test here, as it would be interesting to see an RX Vega 56/64 comparison against a GTX 1080.

At 1080p, Wolfenstein II is very easy to play at a high framerate, though VRAM can easily become a limiting factor at higher settings. 2GB GPUs are usable if you scale the game far enough back, but 4+GB is what most gamers should be using here if you want to play this game at its highest graphical settings. 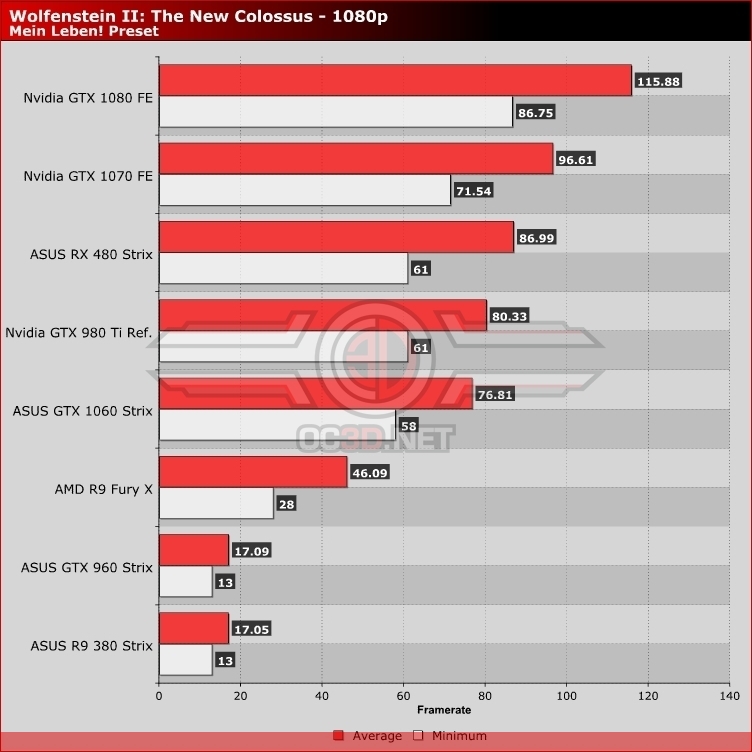