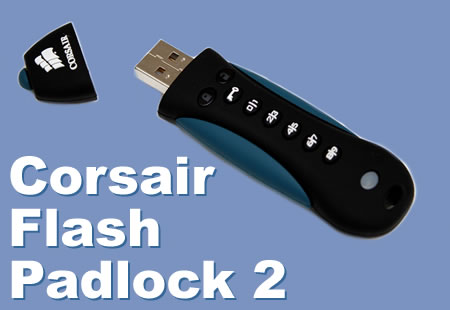 The Corsair Flash Padlock 2 is a simple to use yet effective solution to a problem that most of us are only just waking up to. If you regularly carry around a USB stick that contains personal documents or worse yet, portable applications such as Firefox and that have username/password details for websites stored in them, then you REALLY need to start thinking about a device such as the Padlock 2.

While there are many software applications available on the internet, some even available under GPL (aka free) that will encrypt your existing USB drive. There are very few that will work on any platform (Windows, Windows x64, OS X, Linux...) and the process of encrypting the drive and later gaining access to it is never going to be quite as easy as simply punching in a few numbers on the device its self.

Unfortunately the only downfall to the Padlock 2 is that it cannot call on the resources of the PC to assist with the encryption and decryption process like a software based solution can. Therefore is quite a bit slower than most half decent USB drives. However, we must remember that the Padlock 2 is not designed for speed - and comparing it to a standard USB drive is akin to comparing a Securicor van to an Escort Cosworth. You wouldn't take a Securicor van to a 1/4 mile drag race, and you wouldn't use a Cosworth to transport dangerous convicts or a vault load of cash.

Finally, it's also worth repeating that the Flash Padlock 2 drive is provided with a whopping 10 year warranty. This alone goes a long way to justifying its £44 price tag.

The Good
- Keeps your personal data safe. Even after resetting the PIN, previous data is unrecoverable.
- Easy to use.
- No software to install. Ensuring that it works on any operating system or device with USB ports.
- 10 year warranty makes it a good investment.

The Mediocre
- It's a bit chunky.
- Still unsure on exactly how (if at all) you can set PIN codes with repeating numbers such as 2233.
- Performance is pretty poor. But security isn't without its overheads.

The Bad
- Nothing really, unless you hate sealed blister pack packaging as much as I do.

Thanks to Corsair for the sample today, you can discuss this review, and many others in our forums.

alexhull24
Disappointing performance for the price, but that is to be expected I guess.

If you look at this review, they claim the stick is a lot less secure as the code (from 5 digits) can be guessed as many times as you like with a little dismantling, which I'm sure any serious thief would have no qualms in doing. Fortunately, the chances are your average joe who'll pick it up once dropped will have no idea how to do this. The images also show why the thing is so chunky - it's mostly the rubber casing for durability.Quote

mayhem
10 million possible combination's. Take into account to hack it using a brute force method it would not take that long.

How ever a nice little draw back for you . In the other review corsair use resin to cover the pins to stop ppl getting to the memory. well i can tell you now that is easy to get around. They use the same method on the wii to stop ppl modding there firmware on the wii. Its not hard to get off at all.

They haven't fixed any problems at all from the last model they have just adopted their methods to suit their needs. that thing is as secure as a asda £1.99 belt. It looks good. It seems to fit, but as soon as you start using it, it will fail.

Its 5 keys not 10 - so they are lying and filling the user with bull.

Its doesn't have as many possible combination's as they say

the encryption is questionable to say the lest as the whole drive is unlocked not file by file.

The reset can be worked around by disconnection of the battery.

i love the proverbial bull these manifaures use to sell there products. Just give these USB Keys to the government and let them lose them on the trains as normal and lets see how long it takes for some one to pick one up and then attack's it and then sell's all you info onto to company's.

All so another note if the code like it says has a master is there a second master key that corsair has ... (a back door) ..

3) a sensor to denote weather the red flashes or the green flashes. (red carry on / Green correct stop) A simple detection if there is a signal or not isnt hard to code up.

4) and a last connection to the negative on the battery to disconnect every 5 attempts to reset the drive.

This would be a very simple circuit.

this thing reminds me of them tumble locks ppl have on there bikes because its about as effective as one. infant it would take you longer to decode a bike lock than one of those lol.

conclusion in reality . the product is not a effective solution to modern day problems at all. Its a cheap ineffective product that oky for the normal user but would pose a security risk if used in environments were secure data is of high importance. Personally i think the score is way to high and the price point is to high as well. (or do i just think out of the box)

No offence meant at the reviewer btw.Quote

tinytomlogan
Mayhem did you actually read the review or just trying to look for a fault? Would have been quicker to read it than all that ^^Quote
Reply