Firstly the bottom of the M225 is very clean indeed. Opening it up reveals the Indilinx IDX110M00-LC controller. This controller, named the Barefoot, is rated as delivering 230MBps maximum read speed and supports up to 512GB of MLC NAND. The Crucial is equipped with the LC variant of the Barefoot, basically the the same as the FC version seen in many other SSDs, but the LC versions are more cherry picked to ensure higher performance on higher capacity drives.  Having tested Samsung controllers a lot on OC3D, we're intrigued to see how the Indilinx compares, especially as this is marketed as a notebook replacement rather than a pure desktop speed machine. 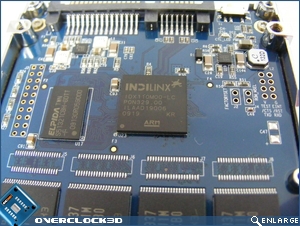 Above the Indilinx controller is the Elpida 64MB SDRAM that is used as a cache to help reduce the stuttering that can occur on high speed SSDs. Naturally this will be tested later on. The RAM used is Samsung K9HCG08U1M chips. RoHs compliant lead-free chips that are multi-layered with a rated latency of 25ns. As Samsung RAM is almost ubiquitous in SSD drives and so has had a lot of development, it should definitely perform as expected. 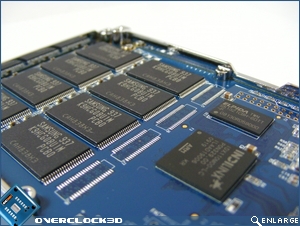 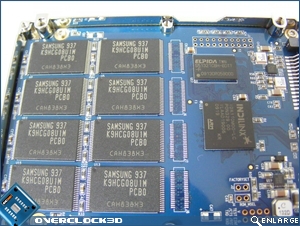 Onwards to the notebook we're going to use for today's tests.

We're about to be on the crest of drives with controllers capable of bursting over 300mbs as an average, one would hope that they take over the £2/G mantle, whilst the ""slower"" <280mbs existing drives head towards £1.5/G (atleast! ) To that extent, it still doesn't look good.

Think with all the reviews of ssds OC3D has under it's belt, we could throw some comparisons charts together.

Luigi
Quote:
Lets hope the prices fall- but the main cost is all the NAND, which is the problem

As for the graphs- The crucial was tested in a notebook, so it can't really be compared with all the other SSD's which were tested on a desktop IIRC.Quote

Rastalovich
For me, the costing is merely "what can we get away with". I understand sourcing and practical supply/demand studies, but in practice it rarely seems to be the case.

Gonna copyright that phrase one of these days. wcwgaw ?Quote

VonBlade
Huh? Considering it's basically memory chips and a controller, try and get 128GB of RAM for £300 and let me know how you get on.

Really, they're quite cheap.Quote
Reply