Whereas the 900P was a fairly regular looking SSD, the PCI Express version of the 905P is probably closer to a DIMM in its presentation. The combination of a black heat spreader on a black PCB give it a very attractive look, whilst the slashes let the LED lighting shine through. Don't get overly excited about the lighting though, it's RGB, by which we mean it can be red or green or blue, but not any mixture of those colours, which is a shame. The U.2 905P matches up to the 900P though by being a finned standard SSD shape that looks like a serious bit of kit. Normally drive chassis are the bare minimum of protection but the U.2 Optane 905P, as you'll see at the end of this review, is industrial and robust in its aesthetic.

The key element that differentiates the Intel Optane range of SSDs from other models on the market is the use of the 3D XPoint memory as opposed to the more commonly found V-NAND. This is designed to produce higher random read and write performance than is usually found, whilst reducing latency, allowing for a crisper response and optimised workflow throughput in low queue situations.

How helpful this is to the regular user rather than enterprise solutions is a matter for debate, but if the Intel 905P manages to match up to the 900P results we saw then there certainly is a strong case for finding a home for it in your system.

The 900P U.2 drive had IOPS - Input/Output Operations per Second - of 550000 read and 500000 write, whilst the PCI Express connector on the 905P promises 575000 read IOPS and 550000 write IOPS. This should allow for a little bit faster speed in some of our benchmarks. Elsewhere the low latency and long lifespan - coupled to a long warranty - should mean that the 905P is as responsive and reliable as it is fast. We also have the U.2 drive from the 905P range in too. Both this and the PCI Express one utilise the same connection once the cable is inserted so there should be very little difference between them.

That's what we're here to discover. 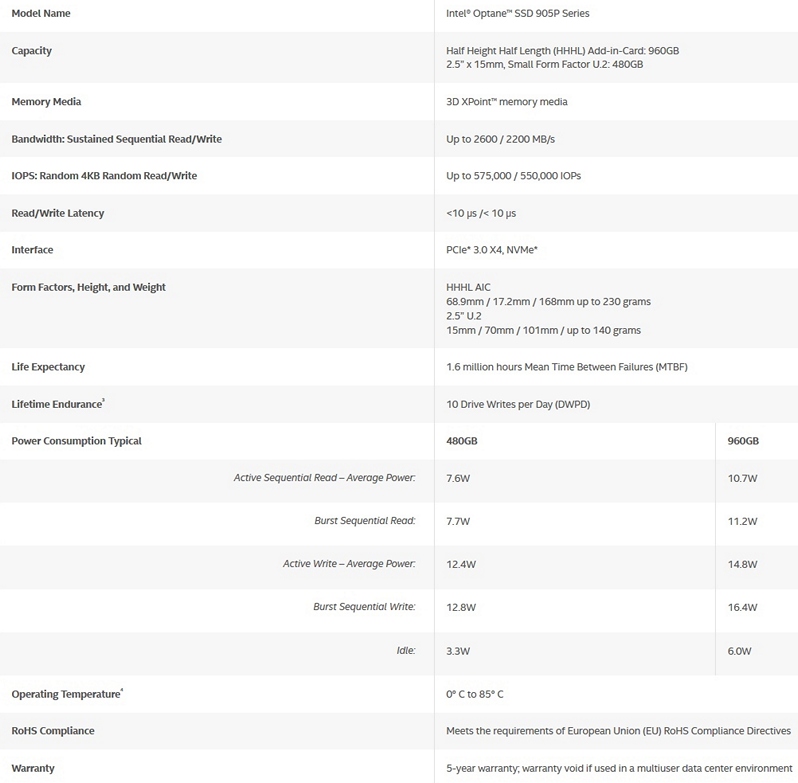