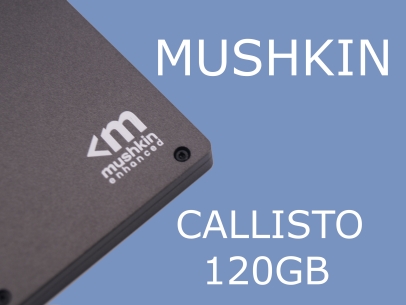 It should be mentioned that the ASRock 890GX Extreme3 sports the SB850 southbridge; this means that the Callisto 120GB SSD will be tested on a SATA 6.0Gb/s interface. The results that follow may not match those carried out on an older SATA 3.0Gb/s controller.

We start off with two Everest based Drive tests; linear read and random read. Starting off in a fairly promising fashion, the Callisto 120GB achieved a peak rate of 274MB/s in our Random Read test, which is just shy of the manufacturer's ratings. Meanwhile in the linear read test, ~235MB/s is all that can be had with an average just south of that. 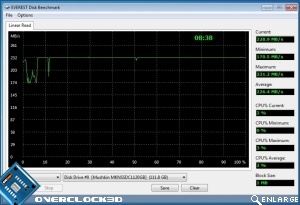 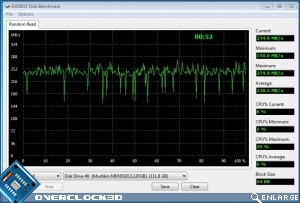 If these results are anything to go by, the suggested data rates of 285MB/s Read and 275MB/s Write are likely to be peak values at best and could well be a little optimistic. Some more tests are in order to be sure of that however...

HDTach reveals average read speeds of around 205MB/s and burst rates just a tad higher than that. 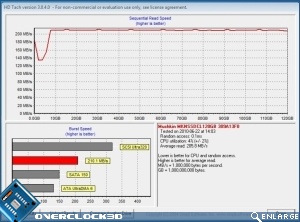 Again, with the exception of the dip observed below 20% utilisation, the Callisto SSD delivers a nigh on flat performance graph. As far as Read performance is concerned, the benchmark suggests an average read of around 210MB/s; up to 75MB/s lower than the maximum specified data rate. The result itself is very reasonable however it stands in the shadow of the recently reviewed Crucial C300, reaching speeds in excess of 300MB/s. 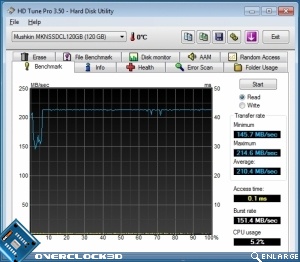 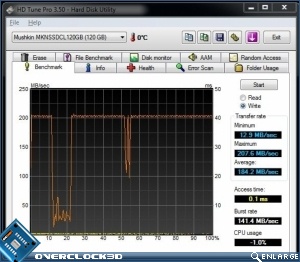 Write speeds are generally the achilles heel of Solid State Drives, however the Mushkin scored a healthy 185MB/s on average. One of the greatest advantages of such drives are it's Access Times, where you can expect 100ns or less, which is nothing when compared to the ~10ms of a conventional Hard Disk Drive.

Crystal Disk Mark on the other hand runs three different tests - Sequential, 512k and 4k block sizes. I would like to point out that read/write speeds are typically much lower when operating on smaller block sizes and that this isn't something of concern. 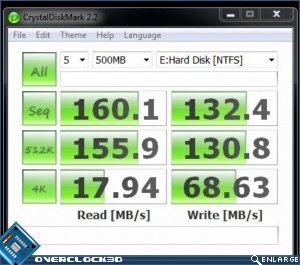 This particular testing methodology outputs much lower (perhaps more realistic) data rates for both Read and Write. We have just a few more benchmarks up our sleeve to prove or disprove this.

Br1t1shB33f
Great technology, but even after all the time these have been out i still cannot justify the inherant massive cost for these. Im going to wait untill they drop below the £200 threshold before i get a SSD of comprable features.Quote
Reply