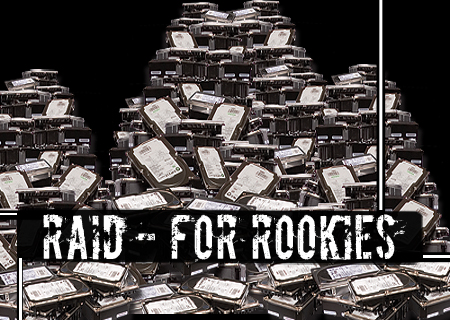 In this brief written introduction to RAID setups, you should now have an awareness of several variations of RAID (unless you did already!), and more specifically their general areas of expertise.  To summarise several key terms:

Performance; this is gained by striping data across multiple drives - thereby allowing data to be processed in synchrony without delays in read/write/seek times.  This attribute offers no safety-net, so if an error occurs on ANY hard-disk drive, it may likely damage the entire array.

Mirroring; this copies data across multiple drives - should one drive, or data element be corrupted or damaged, it will allow the same data to be read from another drive in lieu of the original.   This attribute offers no performance gains.

Parity; this is allows for each data file to have a structured, complete copy placed within the array - should a drive fail, each data file will be able to be fully recovered from either the data parity, or the data stripes.

Homogenous; in RAID-terms, is defined as consisting of near-identical hard-disk drives.  Fully identical drives are difficult to achieve based on variation in disk structure, spin-speed and other physical characteristics; however, same brand, same quoted storage media size and same model are typically sufficient to fit our definition of homogeneous.

Heterogeneous; specific to RAID, this simply means 'non-identical'.  This could be as simple as different manufacturers, different models, or even, in some setups (not recommended, and difficult to construct a RAID with) different capacity hard-disk drives.

Q:  Can I use Solid-state drives for a super-fast array?

A:  Yes and no...  SATA3 and PCI-E SSDs are already ridiculously fast - RAIDing them will either present negligible performance improvement for software RAID0, based on the lack of TRIM support in RAID; or in the case of the mirroring and parity RAIDs, will greatly increase the wear rate of the SSDs, therefore reducing their lifespan.  So it *is* possible, but it does not make financial sense in my honest opinion!

Edit: A brief side note SSD in a RAID0 setup, supporting hardware-level garbage collection will avoid negative issues surrounding performance degradation - but once again, speed and cost are two factors that most of us must balance carefully!

Q:  Software RAID or Hardware RAID - which is best?

A:  Neither outweighs the other in a direct comparison, however, they both have their contrasting strengths and weaknesses.  Software RAIDs excel at being forensically easier to recover (in the event of an error), whilst hardware RAIDs can be notoriously troublesome to restore.   Cost is important, and this is where software RAID, once again beats hardware RAID, in being a far cheaper setup.
Software RAIDs are ideal for high performance enthusiast workstations or home servers, whilst hardware RAIDs offer features (such as hot-swapping and performance increases) which are far more beneficial to enterprise level server farms and clusters.
On the subject of performance increases, the larger array setups of RAID5 and RAID6 - consisting of 4 or more hard-disk drives - require some hefty processing overheads which can substantially dominate I/O data in a software/onboard RAID controlled system.  The benefits of a separate hardware RAID controller are that it frees up the core system processing for other tasks and maintains the RAID without involvement from any other hardware or software.  This often explains end-user complaints of RAID5/6 setups being particularly underwhelming, and sadly, always ends up costing more money at the end of the day as they are forced to abandon their RAID5/6 setup, or walk the path of the hardware RAID.

A: This depends entirely on the controller.  Some will allow different drives (i.e. heterogeneous) to be used together, however they will place a limiter on the larger drive.  This basically reduces the larger drive to only use the capacity of the smaller drive.  So in short, you are wasting 1.5TB of capacity, for the benefit of a RAID setup.   Not the best use of space...

Q: Is it true RAID can only run with SATA connected drives?

A: Absolutely not - you can have IDE, SATA, Serial and SAS drives deployed in RAID setups without issue.  The only issues will be bandwidth, noise and heat.  For instance, SAS are renowned for being high-speed drives (15k spin speed typically), which generates a lot of heat and noise; additionally, peak power (during start-up) can sometimes cause issues on older system PSUs unable to supply the required voltages.

Coming soon - RAID expanded; how to deploy your own RAID setups; more jargon and an unhealthy amount of fundamental hard-disk drive inner-workings to satiate the inner-techie in all of us!

This article is intended as an appetite-whetting device for enthusiasts who are new to RAID, or those who simply want to refresh their knowledge.  Myself and colleagues at OC3D all know that RAID setups can become a whole-lot more complex than this article, so hang-fire, and we will boggle you in future articles! Discuss your thoughts in the OC3D Forums.