Introduction and Up Close

The M.2 socket first appeared a couple of years ago and the market has been slow to take it up in force. Whether, like Thunderbolt, this is because there is already a huge market for regular devices, or whether storage manufacturers are waiting to see which of the two variants will be the winner - akin to VHS versus Beta/HD-DVD vs BluRay etc - remains to be seen.

M.2 devices are 'powered' either via utilising a PCI Express lane, or a SATA port. Not every motherboard supports every type, so unlike a SATA drive you need to do your homework before buying one as they don't instantly work in the same way a USB or SATA would.

Samsung's 850 EVO M.2 SSD utilises the SATA method which instantly eliminates some of the more popular motherboards. ASUS, for example, have only PCI Express support on their Republic of Gamers motherboards so the Samsung 850 Evo M.2 wont work. The official line on this is they actually didnt see a point in supporting M.2 SATA because its not a performance product, its mainly aimed at SFF builds, AIO's and laptops. Before you rage at Asus, Samsung did say at their launch event this isnt being marketed towards performance PC's, so just keep this in mind when reading the review because you wont be seeing M.2 PCIE speeds at all and we should in fact compare this with normal SATA drives.

With the knowledge that this has a small target audience, let's see how it performs.

The Samsung V-NAND 3D flash memory allows for incredibly compact packaging, and never was this demonstrated better than the 850 EVO. It's tiny. Really, seriously, tiny. How the guru's at Samsung manage to cram so much capacity into such a tiny package makes us glad we're not in silicon design. 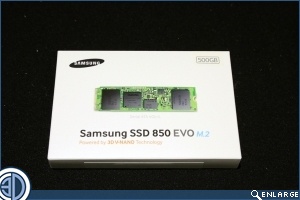 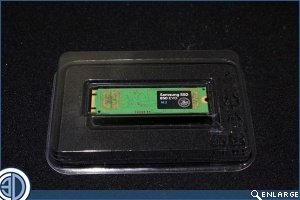 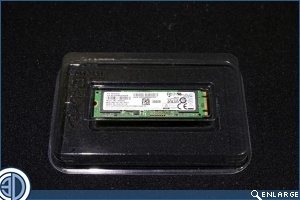 WYP
It is a shame it is still using the same AHCI/sata 3 controller, it is the only thing holding their 3D Nand back.Quote

Von_Emmy
Typo under Conclusion at the end of 3th paragraph:
"..., and the 750 EVO M.2 is certainly fast, without compromising aesthetics."
*850Quote

SCUZNUTS
Hey Guvnor, I just posted a member review of the SM951 SSD to the site last night

Waiting on it to be approved.

Doomslayer
I kinda wish it would be a black PCB not green, I will not be looking to buy one until they start coming out with black PCBQuote
Reply