"Reports of my death have been greatly exaggerated" - A Hard Disk Drive, yesterday.

Today's review, the Seagate Barracuda Compute Pro 10TB hard drive, marks an exciting day in the annals of OC3D. For years our review editor has had some example text in it, much like a web page maker might have the famous Lorem Ipsum text just to fill the page up, so ours has always had something which we felt was as future proof as you could expect, namely that 'Seagate have released a drive weighing in at 10TB". So you can imagine our excitement when Seagate did announce the release of the 10TB Barracuda Pro. Finally the endless march of progress had merged with our beer-soaked musings to create a singularity in which our example review text matched reality. And now, of course, will forever more be out of date.

Such is the consumer weighting towards products that are fast that it's been a long time since we've had a hard disk drive to review in our offices. Almost everything from the first 60GB SSDs to now has been a parade of endlessly faster solid state offerings.

We know we're not the only people who love a fast drive, but also require enormous amounts of storage. High Definition media content requires a lot of storage space, as does anyone with even a medium Steam collection. 10TB should be enough for even the most obsessive collector of large files.

The combination of an enormous capacity and some clever under the hood tweaks mean that this is very much the alpha dog of the HDD range. 7200 RPM is still the class leader in HDD Speeds - particularly since the death of the 10000 RPM Velociraptors - and Seagate have married this fast speed to something they call MTC, Multi-Tier-Caching. The utilisation of a variety of disparate cache solutions (DRAM, NAND Flash and Data Flow Control) to produce something which will bring you your data not only in the fastest time possible but also with the best reliability of parts too. After all, with this much storage on board the last thing you need is a failure. 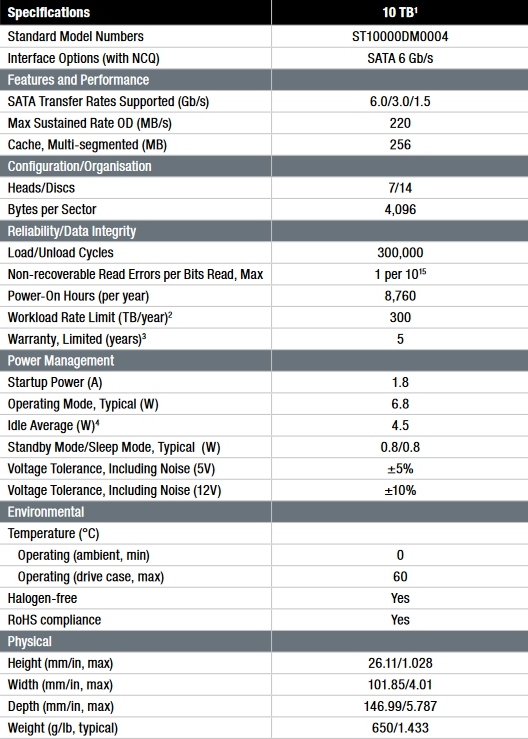 Made by Seagate... screw that!

I personally do not trust Seagate at all and frankly never will, it is a good leap forward but until prices come down I won't bother though to be fair I could probably get away with half that capacity.