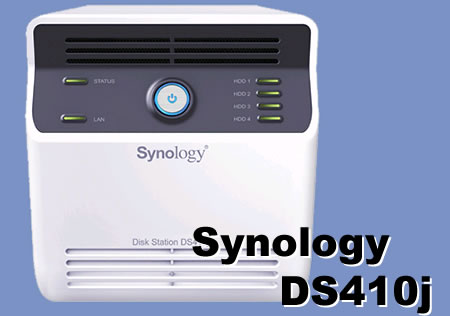 The box the Synology DS410j comes in looks very professional with only a minimal amount of information on the outside describing the contents of the box. Normally manufacturers have to make their product stand out upon the shelf amongst a host of other similar items, but this is clearly a high-end product for the discerning consumer and not something you're likely to find in your local PC World. So what might be considered a curious lack of flair in other products makes perfect sense with the Synology. 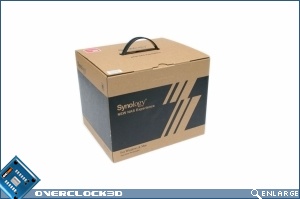 Internal packaging is of a similarly high standard. The main unit is protected by some very sturdy cardboard end-plates and the foam sheets we all know and love. The combination of the sturdy outer box and the robust inner-packaging will ensure that even the most ham-fisted of incompetent couriers will be able to keep it safe.

The accessories that come along with the Synology are provided in a separate box inside the packaging. Something that always impresses as it ensures that the very spiky plugs and similar wont damage the unit in any way. Within this accessories box is a welcome note from Synology, the installation CD, an "assembling kit" which basically consists of the screws to secure the drives in place, the power adaptor and power cord and finally a 2m long RJ45 cable to attach the DS410j to your network. 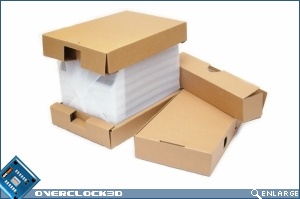 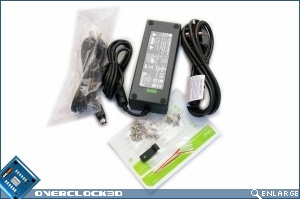 Now looking at the NAS itself it is a very nice looking piece of hardware with a very professional air to it. Nicely understated it will easily blend in to any environment. Measuring in at 230mm X 168mm X 184mm it isn't much bigger than the 4 drives it can house stacked up. The front shows us the status lights, one for LAN activity, one for the status of the unit and four for the disk activity. In contrast to the understated nature of the DS410j itself, the LEDs are unmissable and something that is very important in a unit of this type. The main feature is easily the large on off button, but with the NAS being controlled by software this is not unexpected. You'll also notice the many vents ensuring that even the hottest drives will remain cool whilst installed within the NAS.

The sides are pretty plain, just bearing the Synology name. Here you can see the difference between the metal & plastic aspects of the case. The metal back being removable in order to secure the drives in place. Moving around to the more interesting back, here we find the two 80mm fans that keep the drives cool dominating the metal section. The plastic lower section holds the connectivity comprising of an Ethernet port, 2 USB ports and the power plug. 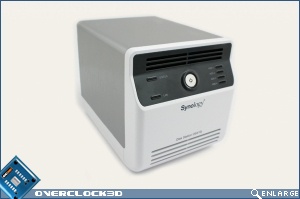 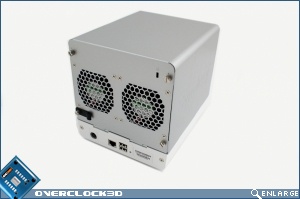 Opening the rear of the DS410j up we can see the important part of the internals, the four drive drawers themselves. Initially we were concerned that the rather sturdy nature of the drawers would impede the airflow, especially around some extreme performance mechanical drives, but the Caviar drives we had on test today remained cool and we know they are generally quite warm. Perhaps if you're planning to run 4 VelociRaptors you might run into small temperature issues but for 99% of uses there is plenty of airflow. Speaking of airflow the fans are very quiet producing no more than the small hum you'd expect from two 80mm fans. In keeping with the user-friendly design Synology have kept the fans accessible so if you want a couple of Deltas you can easily switch them out, and if you inexplicably find the fans that come with the DS410j to be too loud it's a quick job to put in some fans of your choice. 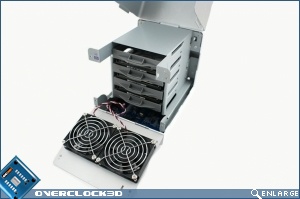 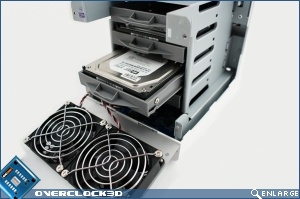 As the Synology design is so recognisable to anyone who's ever opened the side of their case, and that's hopefully all of us, it didn't take long before ideas were being bandied about as how it could be modded. After all if fans can be swapped and the case taken apart, it could be powder-coated. Which opens avenues for any other form of modding. Admittedly it's not something that regularly strikes us when reviewing something, but if the performance lives up, then this could definitely be a product that the mad professors could go mad with.

All in all a very sturdy unit with a nice professional look to it that just exudes quality. With NAS devices being all about the user control though, let's have a look at the software and see what Synology have given us to play with.

deathwish
nice review i love my DS409 there Great Nas's

allso heads up on the forums link on page 5 linking to scan.co.ukQuote

why have a burger if you can have steak?

Never heard of a stake buger ... its rite in the middle of them both.

Nice review how ever i still think its pricing it self way to high.Quote
Reply