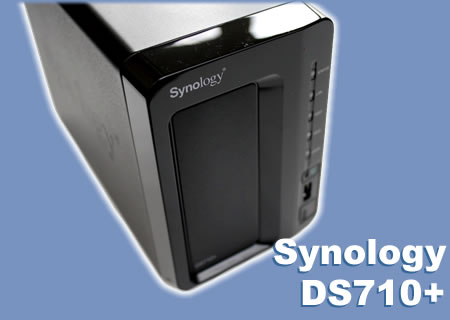 The Synology DS710+ may be pitched as a fairly high-end NAS for SOHO use and as such has a fairly high price tag to match, but in comparison to a fully fledged file server the Synology is actually the budget conscious option. We already know that the DS710+ has a tonne of features that places it ahead of any other storage solutions we've ever seen before, but how does it fair in performance. Will it punch above its weight, offering an excellent alternative to big bulky file server, or will it be just another poor performing box of tricks? To find out we're going to place it head to head with both a low-cost NAS (Patriot Valkyrie) and a full-fat Quad Core dedicated file server.

The configuration of the host machine is as follows:

Testing will be kept as close to 'real world' as possible by making our main focus of todays tests on the transfer of files to and from the test subjects. All test subjects will be assessed using fully initialised and freshly formatted RAID1 arrays, and any potential for bottlenecks at the host end have been removed by using a Solid State hard disk capable of ~200MB/s transfer rates along with teamed dual gigabit ethernet connections connected to a high quality gigabit router.

The first of the tests involves transferring a 1GB VOB file to each of the subjects using a utility called DiskBench by NodeSoft. DiskBench is not to be confused with synthetic benchmarks as the sole purpose of the software is to time the transfer of a specified file between source and target drives. Based on the size of the file and the time taken, it can also calculate the average transfer speed in MB/s. The results are below:

Here we get our first glimpse of the DS710+'s performance. In the write benchmark the Synology NAS manages to perform within only a few MB/s of the full-blown file server, while the budget Patriot NAS puts out abysmal results. This is continued into the single file read results where less than 10MB/s separates the Synology and the fileserver, but once again the Patriot NAS trails miles behind.

Something interesting happens when we attempt to simultaneously read two files back from the devices. The performance of the Synology more than halves, while the performance of the fileserver only takes a fairly minor hit. This would indicate that the DS710+ doesn't quite have the power to deal with multiple connections at once, and may not be suited to environments where lots of people will be writing/reading large files to the NAS at the same time.

Dummy File Creator is a utility that pretty much does exactly what it says on the tin. Random files of any size can be generated by the host machine 'on the fly' and written to any target drive. This removes any potential filesystem bottlenecks on the host machine as as no data is read from the hosts hard disk.  A total of 80 files will be written to each of the devices with filesizes ranging from 1GB to 1KB. Average transfer rate is calculated from the time taken against the total size of all files written (3.1GB).

With the Synology trailing around 12MB/s behind the fileserver, we can see that the mix of small and large files being written tests the performance of the Intel Atom CPU a little more than the single file write conducted during DiskBench. What we need to remember here though is that the specs of the DS710+ are MUCH lower than that of the fileserver, and therefore the results are extremely respectable. The results from the Patriot Valkyrie are once again quite pitiful to the point where it could be frustrating to use as anything more than a backup device.

LAN Speed Test is primarily designed for testing the 'real world' performance of a network connection. It does this by writing a file to a remote network drive and then reading the same file back again. At the same time the test is also heavily reliant on the performance of the host and remote machines (especially over gigabit connections), so this makes for an ideal tool to confirm everything we've seen so far and wrap up the testing section of the review.

The throughput results are pretty much indicative of of everything else we've seen so far with the Synology coming in just a little slower than results from our Quad-Core file server. Whats more interesting though is that with the results presented in Mbps, we can see just how reliant the DS710+ is on a good quality Gigabit connection. Furthermore, the 'time taken' results show just how much slower the Patriot NAS is at performing file transfers. Up to 6x slower in some cases!

Now lets head over to the conclusion to try and wrap things up.