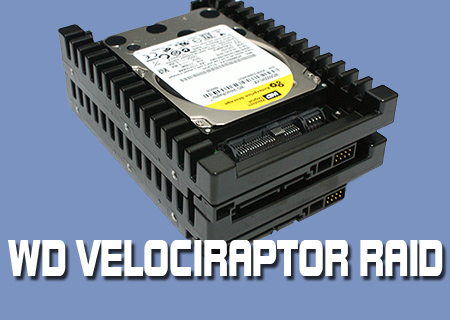 As someone who was brought up in the days when you had to rewind the tape and turn it over half-way through loading, I still find a plain hard-drive to be surprisingly rapid, but like everything in life the technology moves on and you have to adjust your concepts of "big" or "fast" with them.

Just like the 1GHz processor was once a dream and is now a dinosaur, Solid State Drives have shown that your average 5400RPM hard-drive just doesn't cut it anymore.

But Solid State Drives are, and let's not kid ourselves, eye-wateringly expensive. Sure they are cheaper than they used to be but you're still talking £2 per GB, or about £500 for the example we used for comparison today. Enter our Western Digital VelociRaptor RAID 0 setup. The thick end of 1TB of capacity for about £360 with promises of SSD like speeds is something that just couldn't be ignored. Is the future of cost-effective high-performance storage really the same as it's always been?

The VelociRaptor absolutely creams some hardcore testing giving us close to 290MB/s transfer speeds in the linear tests.The write speeds were equally impressive and some way ahead of the SSD.

As always though the synthetic benchmarks and headline grabbing numbers don't really tell the whole story. Sure it's blazingly fast, be in absolutely no doubt about that, but it's also a lot slower as you reach the edge of the platter. Smaller file transfers suffer because of the inherently slower seek speeds available to a mechanical drive.

Finally, in our PC Mark Vantage testing, which is as close to a real-world test as we can get without loading and unloading hundreds of applications for a week, showed that the SSD is, by a hugely comfortable margin, still the weapon of choice if sheer performance is your goal.

Sheer performance in SSD terms though comes at a massive cost of even a remotely affordable one being limited to an OS drive and ones like the 256GB we have today being useful as an OS and application drive, but not really for storage. That's where the waters get muddied as the VelociRaptor is obviously slower, but also 4 times the size.

At the risk of ending up with some "5 computers" quote, this is probably the pinnacle of mechanical drives. With careful use, making sure that you don't fill the drive right up and keep defragging to leave the data near the centre, it's as fast and reliable as you could ever hope for without moving to the non-moving drives.

For the sheer capacity and performance at this price, we have to give it the Silver award. Just a shame the real-world testing doesn't quite bear out the linear speeds.

Thanks to Western Digital for providing the VelociRaptors for todays review. Discuss in our forums.

dipzy
Quote:
They still pretty amazing drives, i got a 120gb ssd for my operating system, 300gb velociraptor for my programs and games also a 2tb sata drive for my music and HD Video's

yggdrasil
Quote:
How dose that setup work for you?

I am thinking of setting my system up the same way.Quote

dipzy
Quote:
It works extremely well, you know where everything is and it easy to manage files on the pc. I find that since upgrading to this setup from just one 1tb drive with everything on it, my pc has become so much responsive and storage is not a problem no more

I would recommend a setup like this to everyone

yggdrasil
I just would use it for large programs, games and what not and the SSD for windows and smaller programs.

? that a lot of data, you would need 3 x 2tb drives or more for storage