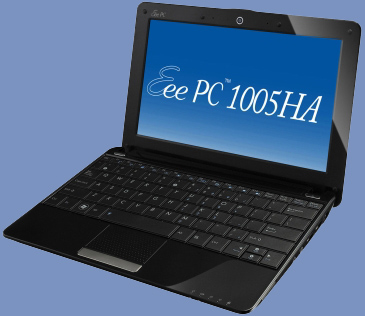 In order to determine the usability and ergonomics of the EEE PC 1005HA, the laptop was used as my general purpose machine over the course of a whole day. This included emails, web browsing and basic media playback. This also covered portability, where I parked myself in Starbucks for a considerable amount of time, summarising my thoughts about the laptop. It was a Sunday at a busy Starbucks in Central London and if it wasn't MacBook territory, I'm not sure what else it was. Anyway, given the circumstances I thought it was time to try out a new game of mine. All will be revealed in the conclusion... 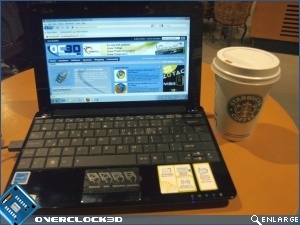 Let’s start with the keyboard. As with most 10” laptops, it’s keyboard size is a generous compromise between smaller 8.9” variants and fully fledged 13.3” and up laptops. It may take some getting used to as keys found on the edge of a conventional QWERTY pad will be somewhat squashed, but nevertheless everything is where it should be. The keys have a sensible amount of resistance and all in all I’d say it is unlikely to cause most people grief during extended periods of use. There is a drawback on the 1005HA although unrestricted to all other netbooks in that there isn’t much scope to rest one’s palms on the laptop base and this might cause some discomfort for those with larger palms.

The mousepad isn’t all that bad either. Probably the biggest gripe about my Samsung NC10 is it’s poorly sized mousepad. Asus have incorporated one that is roughly as wide but another 5-10mm taller – a small technical difference that has quite a considerable effect in practice. The mouse pad sits at the same height as the rest of the laptop base and distinguishes itself by means of a lightly studded texture. Some may prefer a smooth pad surface but really it didn’t cause any problems.

I was left rather unimpressed by the multi gesture functions that allowed the user to scroll, rotate and zoom in/out. The gestures themselves are sensible but the response was rather sluggish. This was most notable with the rotate and zoom functions however scrolling performance was adequate.

Finally, let’s talk about the laptop screen. From a technical perspective there’s little to comment on as with most other 10” netbooks, it’s a fairly conventional LED backlit 1024x600 resolution screen. I was impressed to see that Asus’ brightness control module allows for 15 increments in backlight intensity. Much of the lower end isn’t adequate enough for usage on a bright day however will work a treat in low lit lecture theatres or night time flights for example. Today, the laptop was used with a brightness intensity of 10, which seemed to be the sweetspot in my opinion. All in all, the quality of the screen is very good. Our particular sample had no backlight bleed and while viewing angles aren’t great, I think it can be safely said that you don’t want the person sitting next to you on the train invading your privacy!

The Asus EEE-PC 1005HA is fitted with an 802.11n Wireless Adapter. The range was found to be more than adequate and at no point didthe laptop lose it’s network connection.

As the day draws to a close, I’m left feeling impressed by our little EEE-PC. As a basic machine, it appears to have ticked all boxes. The battery was indeed drained to an indicated 5% by the end of testing making this the perfect time to discuss it's lifespan away from it's AC Adapter.

One of the major advantages of the EEE-PC 1005HA is that it comes bundled with a 6 cell 4400mAh battery. This is rated for up to 8.5 hours of operation, which sounds both impressive but potentially optimistic. Did we match it? Sadly not, but we certainly came close.

Three battery tests were run. The first two were operated by an application known as “Battery Eater”. This recorded an idle and load test. The third test is a general purpose test, which was recorded manually by myself as I operated the laptop for the day. WiFi was enabled for the duration of all three tests, while the monitor brightness levels were set to 1, 5 and 10 respectively.

Our tests were unable to match the rated 8.5 hours however we were impressed regardless. With our general purpose tests weighing in at a mighty 6 hours 43 minutes, it can be safely said that the 1005HA is one of the better performers out there.