One of the major upgrades offered by Intel's NUC 11 platform is support for PCIe 4.0 connectivity, which comes via their 11th Generation Core Tiger Lake processors.

Intel supplied their NUC 11 Extreme with a 500GB Sabrent Rocket 4 SSD with our test sample, offering us 500GB of storage and advertised sequential read speeds of up to 5,000 MB/s. We easily achieved these speeds in CrystalDiskMark, even after filling the drive with over 350GB of files.

The only limiting factor for SSD performance in this system is its supplied SSD. 5,000 MB/s is far from the performance limit of PCIe 4.0, and faster SSDs are currently available. Still, the joys of Intel's NUC Extreme platform is its barebones nature, allowing users to invest in the storage medium that they would prefer. Faster 7,000 GB/s SSDs are supported within this NUC.

Users of Intel's NUC 11 Extreme also have the option to install multiple M.2 SSDs, many of which can be installed on Intel's NUC Compute Element board itself. 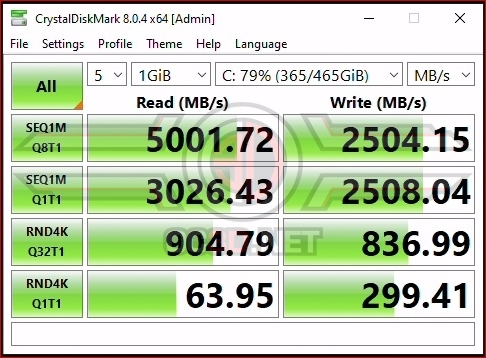 If there is one area where Intel's NUC 11 platform could fail, it is in its thermals and acoustics. Intel's i9-11900KB processor is powerful, and Intel's NUC Compute Element board is small. That leaves little to no room for a heatsink and a lot of potential for high noise levels under high system loads.

Thankfully, Intel's NUC 11 Extreme and NUC 11 Compute Element are designed with their platform's limitations in mind. When running Cinebench R20's all-core workload we see Core thermals hover around 67/68 degrees after a short period. These temperatures are nothing to worry about, but this only tells part of the NUC 11 Compute Element's thermal story.

If you look at the data below closely, you will see that the maximum temperatures of each core are much higher than the 67/68 degree temperature that we listed. Once we start Cinebench, all cores are running at, or close to their boost frequencies, and soon after Intel's power management system kicks to lower the CPU's clock speeds to near its base clock frequencies and to deliver lower thermal loads and higher core efficiency levels. This is by design. 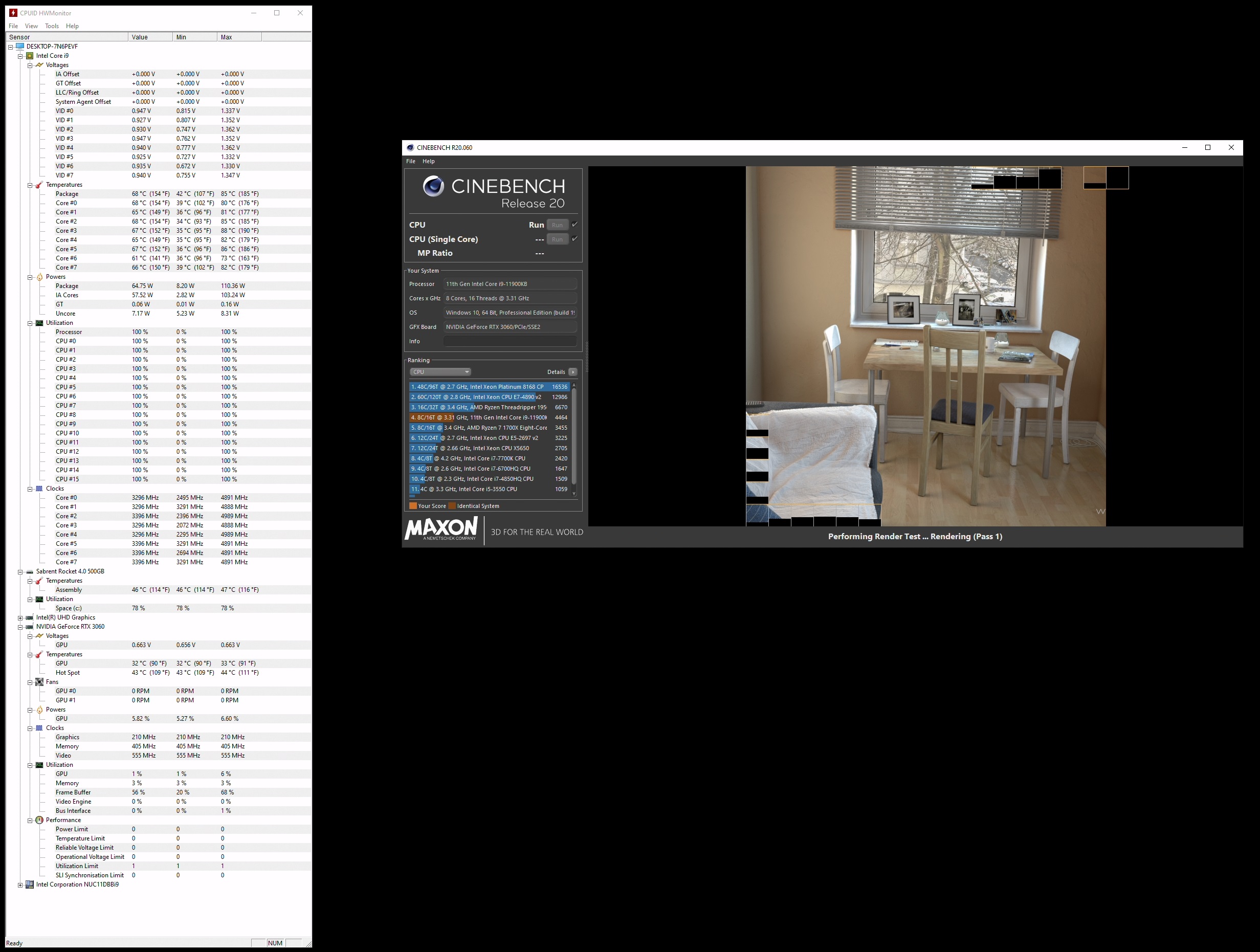 Below, in a single-core Cinebench R20 workload, we can see single-core and package thermals reach 80 degrees. Initially, thermals can reach as high as 95 degrees, but things stabilise once the system's fans kick in.

High clock speeds can be maintained in single-thread and low-threaded workloads and peak performance levels can be delivered over a longer period of time. Ironically, this can also lead to higher fan speeds and higher CPU core temperatures. This is not bad, but it prevents Intel's NUC 11 Extreme from being silent under all circumstances. The system was louder in a 1-core workload than it was when all cores are fully loaded. 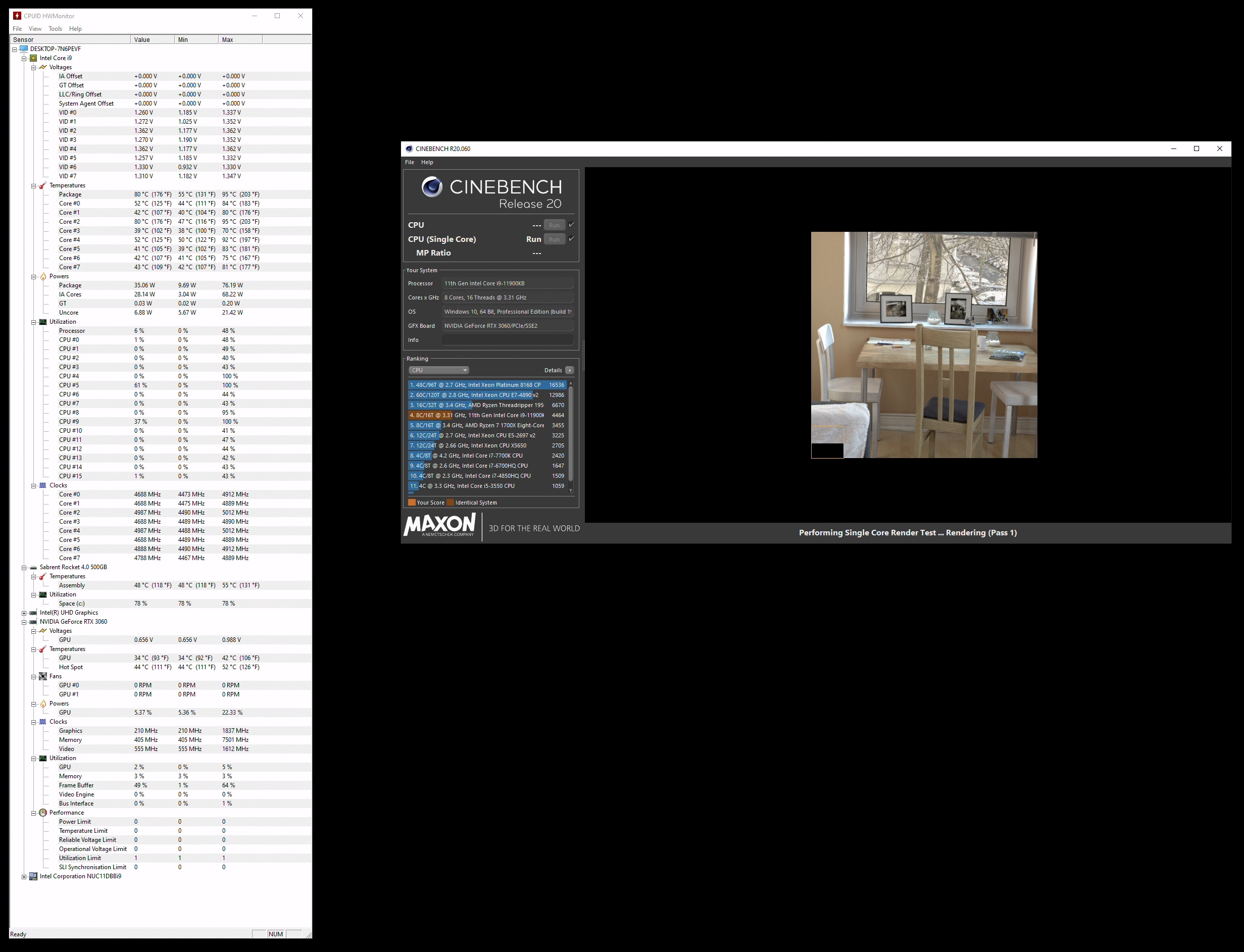 Moving onto OCCT's all-core load tests, we can see that after over 30 minutes of testing that Intel's NUC Compute Element i9-11900KB reaches steady-state temperatures of around 71/72 degrees Celcius. Again, this is nothing to be concerned about and the system remained quiet under this use case. 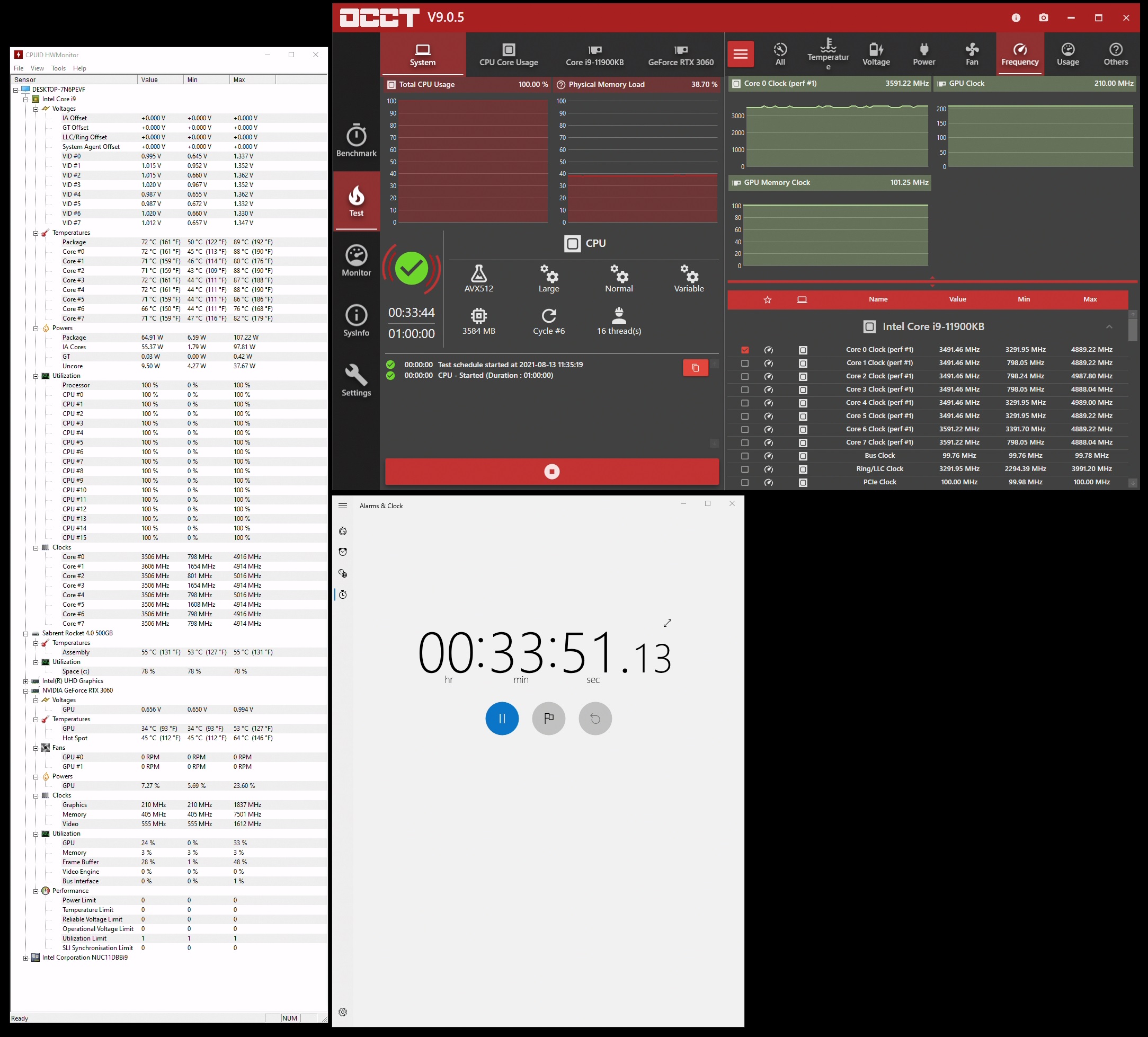 Our Intel NUC 11 Extreme review sample features an ASUS RTX 3060 Dual graphics card, and to test the thermals of the GPU within Intel's NUC enclosure, we tested it under Unigine's Valley benchmark for over 35 minutes. Here, we saw the graphics card reach 72 degrees celsius. By GPU standards, this is not very hot, and that is great news for NUC users who may want to install large graphics cards. 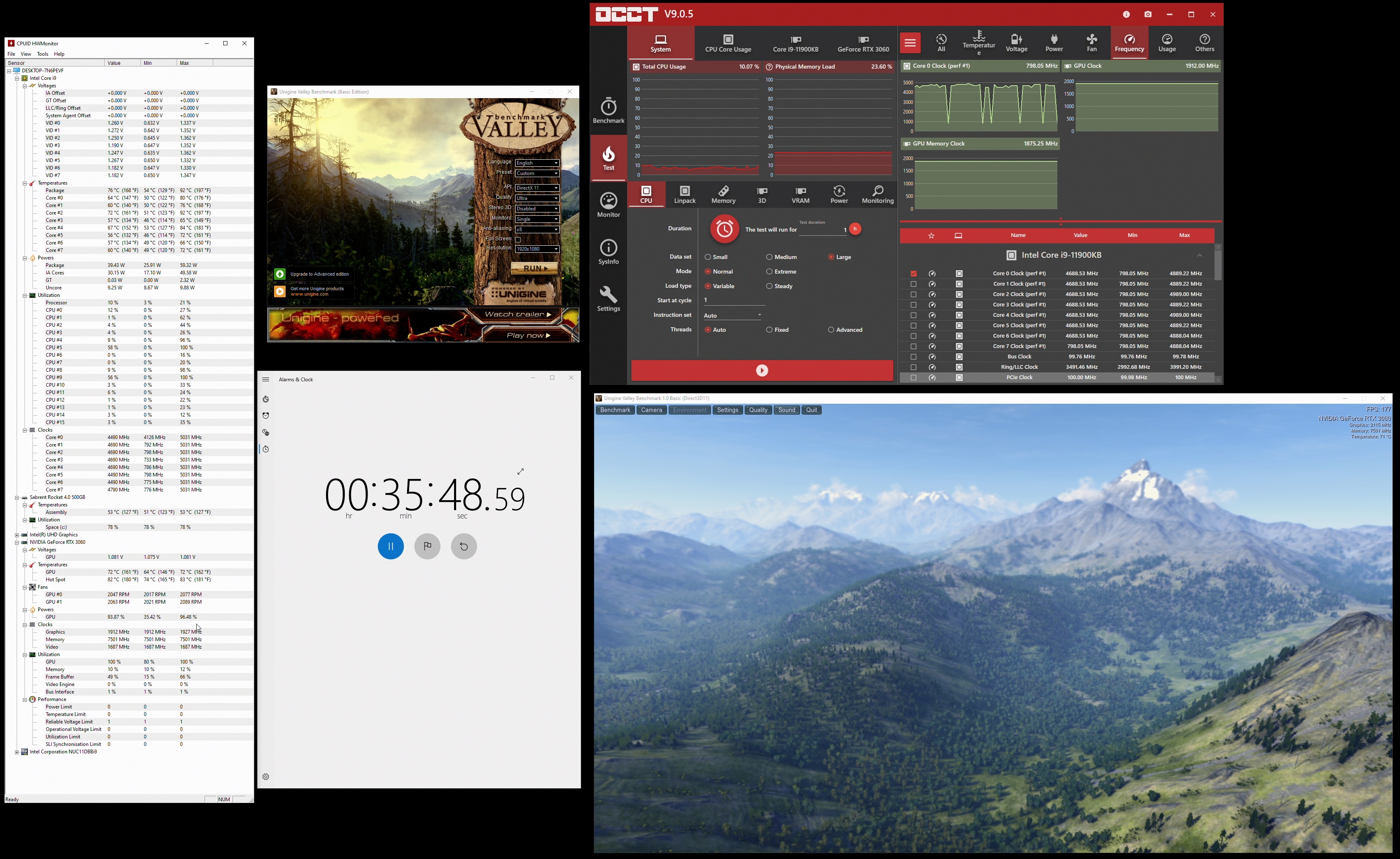