We Visited PCSpecialist - Here's what we found

These PC cases are a custom variant of Corsair's 175R RGB mid-tower enclosure, which ships with PCSpecialist branding and an RGB illuminated logo. When you build PCs at this scale, you are a large enough customer to have your own logo on your hardware.

If you have ever water cooled a PC, you will know that it takes a lot of time and effort to build systems like this. Beyond that, the sheer mass of the coolant inside makes moving and shipping these systems harder than most standard PCs.

We got to see several systems while they were being stability tested and leak tested. PCSpecialist tests puts these PCs through a 24-hour leak and pressure test before they are even powered on, and after that they are tweaked, overclocked and stability tested. After Windows and drivers are installed, these systems are then stability tested with a 48-hour burn-in test.

To say the least, these systems are a massive undertaking for PCSpecialist. They require more effort to build, longer testing procedures, and the tedium of manual overclocking. If PCSpecialist wanted an easy job, they wouldn't build these systems, but PCSpecialist is a company of hardware enthusiasts, and that's why they produce liquid cooled systems.

And now for one of PCSpecialist's most impressive tools! Last year, PCSpecialist purchased a laser engraver. Why? Laptop keyboards!

Europe has a lot of languages, and having a stock of laptops for each of them takes up a lot of space. When many languages only account for a small percentage of PCSpecialist's orders, there are financial incentives to drop support for them. PCSpecialist needed a clever solution to this problem. They needed a laser!

PCSpecialist laser etch the keyboard keys on their laptops. This allows them to save money by doing the job internally (their OEM doesn't need to do it), and allows them to support most of Europe's languages and keyboard key configurations. To see this machine in operation is a delight.

Below, you should be able to see the jig that PCSpecialist has created to allow their technicians to place their laptops in the correct location every time. One has to wonder what else they could use this laser for? 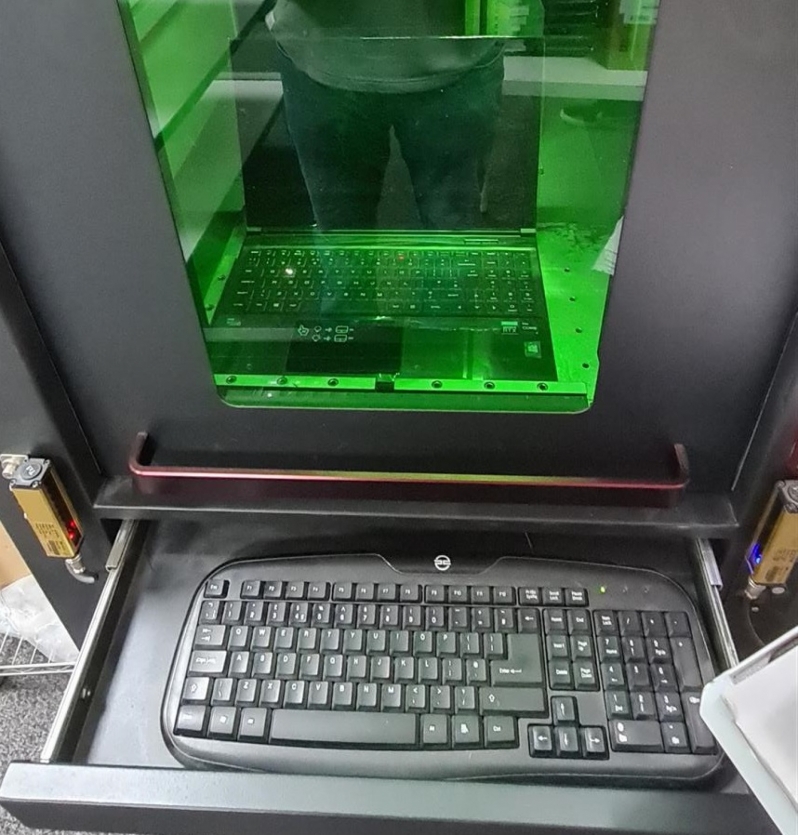 So that's it. We have looked at most of the pictures that we were able to take while visiting PCSpecialist. We hope that this brief look give you a newfound appreciation of what PCSpecialist does, and the sheer scale of what they do over there.

You can join the discussion on PCSpecialist's warehouse on the OC3D Forums.

spolsh
Looks like a hell of a place ! Nice of them to open the doors for you to visit. I would never have imagined what it actually looks like in there ... is the 48 hour burn in test run on nicehash ? (lol)Quote

66racer
Goals. Wish I could hear an interview with the founders of some of these companies to hear of the business lessons learned from this industry specifically.Quote
Reply