Alphacool is now ready for Threadripper

Alphacool has released their new TR4-ready retention kits for their Eisbaer series of CPU AIO liquid coolers, their XPX ice CPU water block and Be Quiet!'s Silent Loop series of AIO liquid coolers. This upgrade kit allows all of these coolers to easily mount onto AMD's new Threadripper series CPUs, allowing them to cool CPUs with up to 16 cores and 32 threads.
Alongside this Alpahcool has also revealed a prototype of their upcoming Eisblock Flatboy CPU water block, a block that was originally designed for server-grade CPUs and comes with an integrated pump. This block can utilise fluid inputs and outputs on the sides and front of the water block, though on TR4 systems this block's connection points can interfere with your motherboard's nearest memory slot. 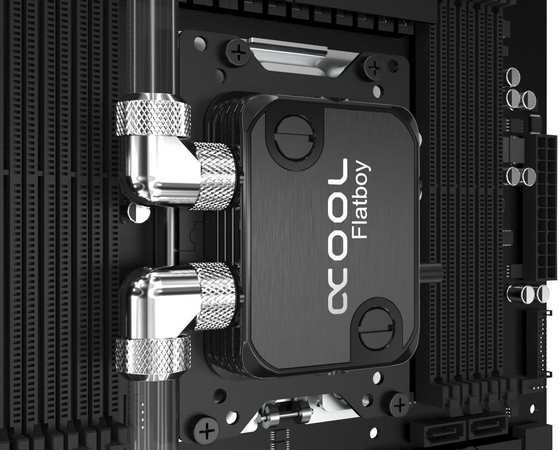 You can join the discussion on Alphacool's new TR4 retention kit and Flatboy water block on the OC3D Forums.

AlienALX
Looks cheap AF. I mean yeah it's tidy, but it just looks cheap.Also a bit daft that the side loading method seems to block a DIMM.Quote

Eddie long
not as nice as the xspc or bykski version , probably well built though , think the side ports are more for show guessing the 2 top ones are more usefulQuote

Bartacus
I'm starting to think a lot of Alphacool products are kinda crappy. Or if I'm being nice, "overrated". I like *some* of their ideas (ie the multiple ports on this thing). But overall, they leave me with a very "meh" kind of feeling. At least this CPU block isn't as repulsive as their last set of blocks (which are gross rounded stupid-looking things).Quote

AlienALX
Quote:
TBH they look cheap even though they are not. I have a pump res combo and the pump is crap. So noisy, even at low voltage.Quote

Bartacus
Quote:
Yeah I've had a Radeon 7950 block from them (no complaint), and have a pair of their Monsta rads in my current rig, and those rads were filthier than the filthiest pr0n star when I first got them. I swear I flushed those things upwards of 10 times and black gunk was STILL coming out of the rads. They project the image of a premium brand, but they're stuff is cheap. They aren't even in the same league as the bigger boys, especially Watercool. Those guys know how to make great blocks.Quote
Reply