ASUS has officially revealed their Z590 motherboard lineup, complete with ROG, Prime and TUF models. With Z590, ASUS are ready for Intel's next-generation products, offering support for high-end features like Thunderbolt 4, PCIe 4.0 and USB 3.2 Gen 2X2 on many of their latest designs.

Following the launch of the Intel® Z590 desktop platform at CES 2021, ASUS today announced its new Z590 series motherboard lineup which spans the entire spectrum of top-end ROG Maximus XIII, high-performance ROG Strix, durable TUF Gaming, and steadfast Prime motherboards. These motherboards are designed to maximize the full potential of the 11th Gen Intel Core processors and feature beefed-up VRMs for responsive and reliable power delivery, along with enhanced VRM and M.2 thermal solutions. Comprehensive connectivity options include onboard USB 3.2 Gen 2X2 Type-C, up to 10 Gb Ethernet and future-proof Intel WiFi 6E. In addition, a host of AI-powered technologies — AI Overclocking, AI Cooling, AI Networking and Two-Way AI Noise Cancelation — allow users to optimise their system with minimal effort. A full reveal of each series will be held in the coming weeks. 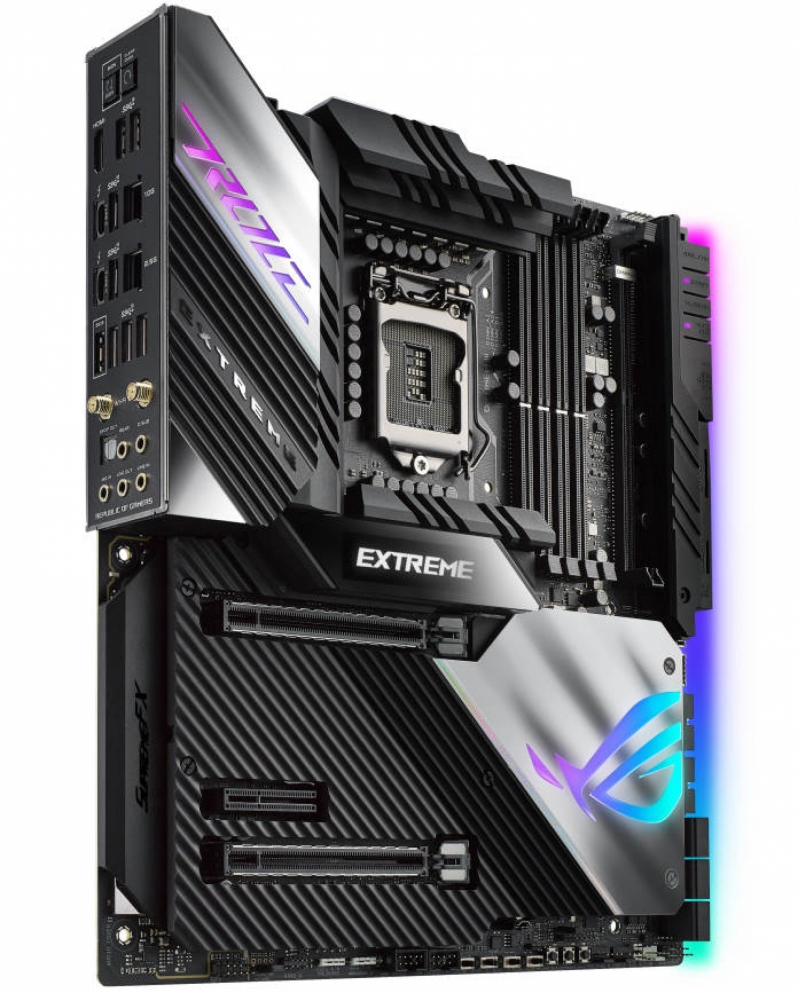 With Z590, ASUS is creating two ROG Maximus XIII Extreme motherboards, one of which features a full-cover water block for the motherboard's VRMs, chipset and CPU socket. ASUS has partnered with EK to deliver the ROG Z590 Maximux XIII Glacial, which promises to be one of the coolest running motherboards around.

Powerful processors need plenty of juice to realize their potential. For Z590, we’re raising our power delivery game once more with redesigned multi-phase VRMs that range up to an massive 18+2 topology on the top-end ROG Maximus XIII Extreme. ROG Maximus XIII motherboards also employ highly capable and efficient integrated power stages across the lineup to support high sustained performance and the most demanding overclocking expeditions.

ROG Maximus XIII, ROG Strix, and TUF Gaming boards all use our VRM heatsink design to keep these many-phase VRMs cool. ROG Maximus XIII and ROG Strix boards employ individual high-surface-area heatsinks built atop wide heatpipes for highly effective thermal transfer from the circuitry beneath, while the TUF Gaming Z590-Plus WiFi uses large discrete heatsinks. On all of these enthusiast-friendly motherboards, our latest VRM cooling approach transforms the I/O shroud from a primarily cosmetic polymer element to a massive alloy shroud that’s fully integrated with the rest of the motherboard cooling system for lower VRM temperatures than ever. Our Prime Z590 motherboards also stand ready for 11th Gen Core CPUs with expanded VRM heatsinks covering all of their power-delivery circuitry.

Of course, VRMs are only one component that can limit your PC’s performance without proper cooling. We also beefed up heatsinks across the rest of the motherboard for this generation. ROG Z590 boards unlock the best performance from both PCIe 3.0 and next-generation PCIe 4.0 SSDs by sandwiching them between heatsinks on both sides. Heat from those SSDs has more routes for escape than on motherboards with a single heatsink on top of the drive.

We’re also extending our renowned cooling and RGB LED control capabilities from the Maximus XIII Extreme and Maximus XIII Extreme Glacial to let demanding builders realize their most complex cooling and lighting visions. Both of these motherboards will include the new ROG Fan Controller module. This hub fits into a 2.5” form factor for easy mounting in a system, and it includes six pairs of addressable RGB and four-pin fan headers that integrate with our Fan Xpert and Aura Sync tools for precise control. The ROG Fan Controller also includes two thermal sensor headers to expand the monitoring capabilities of both Maximus XIII Extreme motherboards. 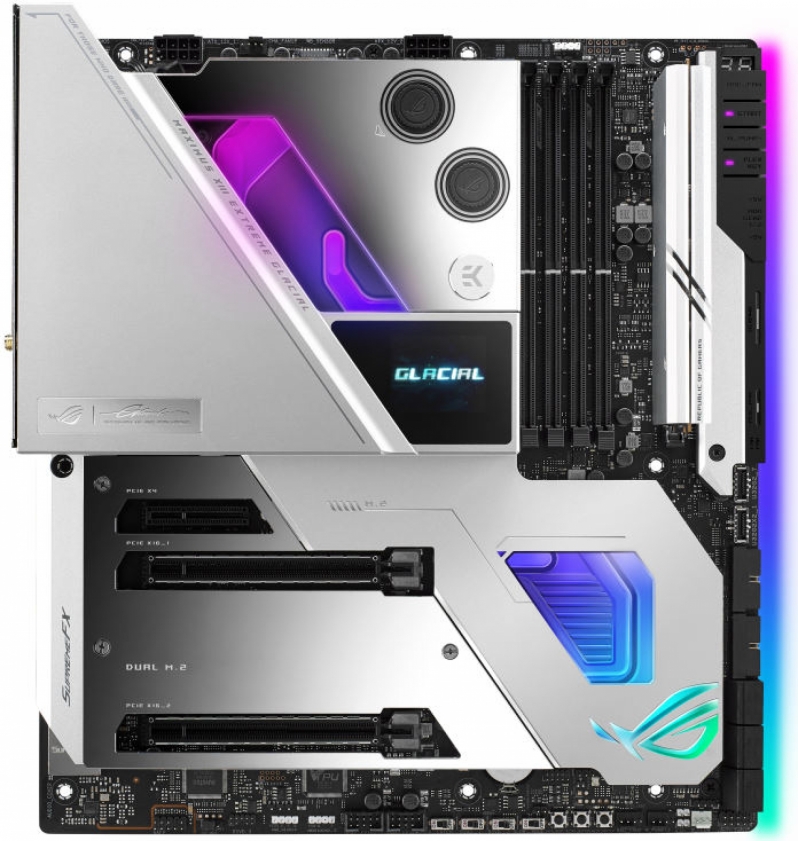 Speed isn’t optional in a next-generation system. On top of the PCIe 4.0 support offered by 11th Gen Intel Core CPUs, all of our ROG Maximus XIII Z590 motherboards offer up to two onboard Thunderbolt 4 USB Type-C ports. This standard offers up to 40Gbps of bandwidth over cables up to two meters in length, in addition to full support for the next-generation USB4 protocol. No matter what peripheral devices you connect to these ports, you’ll enjoy consistently high performance.

A new generation of Wi-Fi is right around the corner, too. 6GHz spectrum, allocated for Wi-Fi by the United States Federal Communications Commission, opens up a vast new frontier of prime wireless networking airspace. Once Wi-Fi 6E devices are approved for operation by regulatory bodies, you’ll want your next PC to be ready from day one. We’ve already blazed the trail to Wi-Fi 6E adoption with the ROG Rapture GT-AXE11000 tri-band router, and both ROG Maximus XIII and ROG Strix Z590 motherboards will be ready to take advantage of the GT-AXE11000 from the day they’re cleared for takeoff in this new spectrum thanks to integrated Wi-Fi 6E-ready wireless NICs. 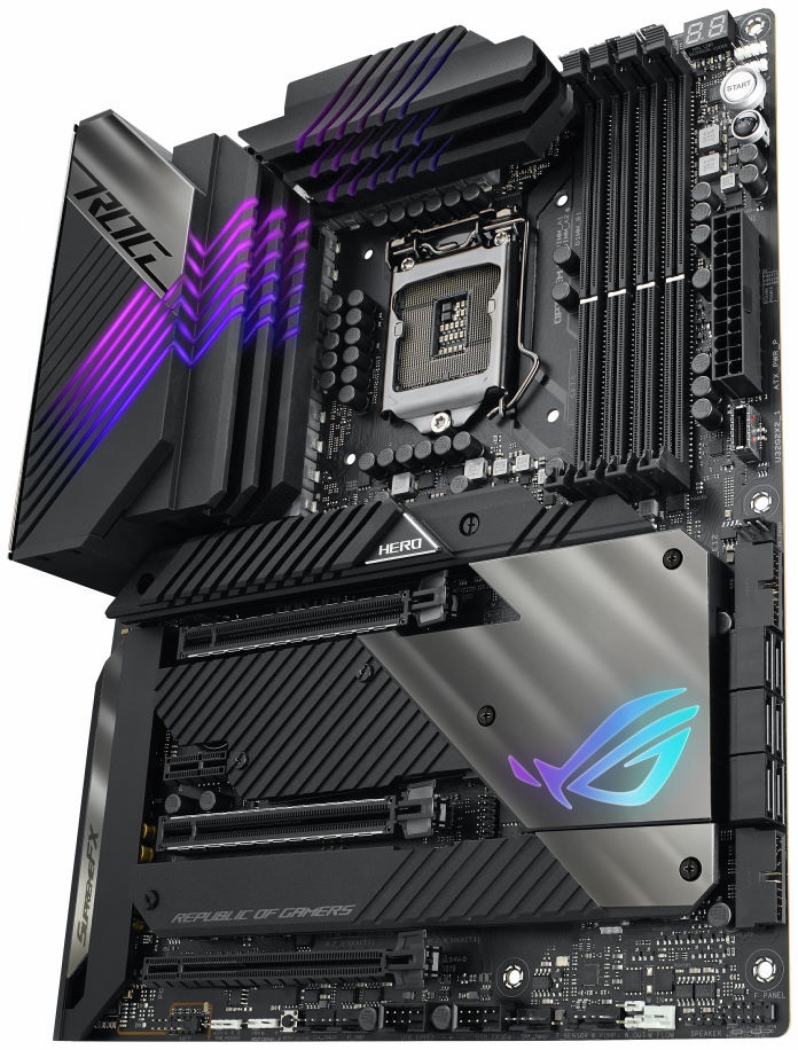 With the ROG Strix Z590, ASUS will be offering its users a feature set that's more similar to prior generation Maximus Hero series motherboards, upgrading the Strix series to make it a more premium brand. With ROG and ROG Strix Z590 motherboards, ASUS will be using Realtek ALC4000-series audio codecs to deliver higher quality audio for both music lovers and gamers alike.

Finally, ROG and ROG Strix Z590 motherboards also employ new Realtek ALC4000-series audio codecs to deliver the highest-quality sound for both music and games. Select models pair that next-generation audio codec with audiophile-grade ESS digital-to-analog converters for the purest sound through high-fidelity headphones. We pair those components with our SupremeFX suite of circuit design and software tools to ensure the most satisfying hi-fi gaming and listening experience around.

For the most exacting listeners, ROG Maximus XIII Extreme and Extreme Glacial boards will include the new ROG Clavis, an outboard USB Type-C DAC that employs four ESS converters dedicated to discrete ranges of the audio spectrum. By separating the digital signal associated with each of these spectral ranges, processing their signals on dedicated hardware, and combining them into one analog signal, the Clavis ensures the absolute highest signal-to-noise ratio and lowest distortion in the final analog output. All that happens in a package that’s isolated from potential sources of electronic noise inside your PC’s case. 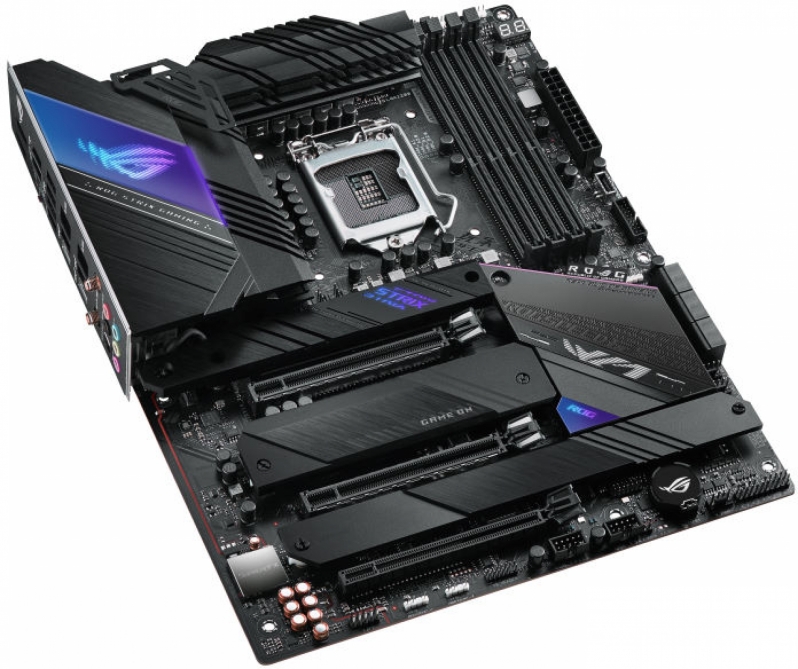 One of the key parts of ASUS' motherboard catalogue is their extra features, aspects of their motherboards that their competitors cannot easily copy. With their suite of AI technologies, ASUS promises to deliver to its users support for two-way noise cancellation, eliminating the background noise from audio feeds from your home and the gamers you are playing with. In short, this feature will give you, and your friends a better listening experience on Discord and other chat apps.

ASUS' AI Networking is also designed to ensure that the right data is prioritised, giving gamers a small edge online. AI cooling is also designed to utilise information about your system fans and cooling setup to achieve the best balance between performance, cooling and noise output. While many users will choose to ignore these add-ons, they are a useful part of ASUS' Z590 product stack, even if they are software-based.

Powerful hardware needs intelligent software to unleash its full potential, and we’re constantly on the lookout for ways that we can improve or refine your experience with clever software tools. Our suite of exclusive AI-powered technologies returns on the Z590 platform to maximize your system’s performance with minimal effort.

AI Overclocking, powered by exhaustive research and characterization of the performance potential of thousands of actual CPUs in our testing labs, continues to lead the industry for overclocking performance and ease of use. It boosts CPU clocks for both lightly-threaded and all-core workloads with just one click. AI Overclocking’s sophisticated intelligence also monitors the efficiency of your CPU cooler and changes in the operating environment of your system to tune its parameters over time for the best performance with your system’s unique set of components.

Two-way AI Noise Cancelation removes distracting background noise from both your microphone and from other audio sources, ensuring you can hear and be heard with crystal clarity in games and group chats. AI Cooling integrates information about your system’s fans and component temperatures to automatically achieve the best balance between cooling performance and noise levels. And AI Networking draws on an extensive database of application profiles and a view of your current network activities to ensure that the right traffic always gets priority. To take full advantage of these AI-powered features, you’ll want an ROG Maximus XIII or ROG Strix Z590 motherboard. Select AI features will also be available on TUF Gaming and Prime motherboards. 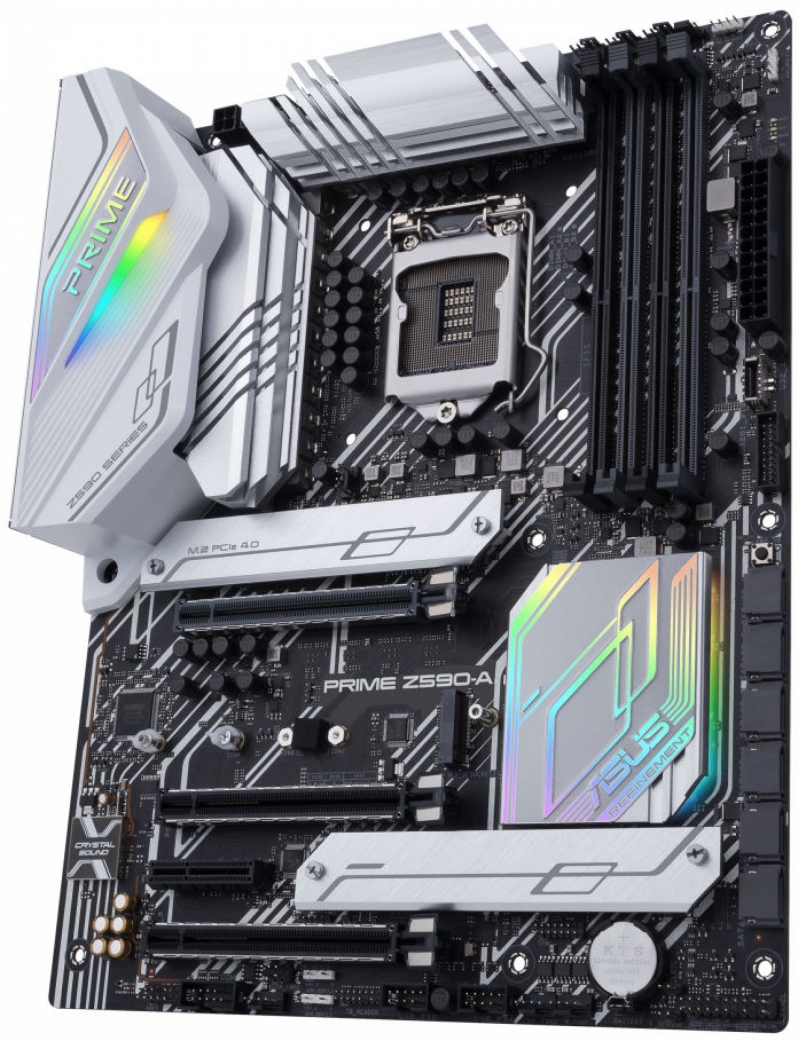 ASUS's 500-series product stack does not end with Z590, as the company has confirmed that a wide range of H570, B560 and H510 motherboards will also become available in time. ASUS also plans to support Intel's 11th generation core processors on their existing 400-series motherboards, which will require a BIOS update to support Rocket Lake. 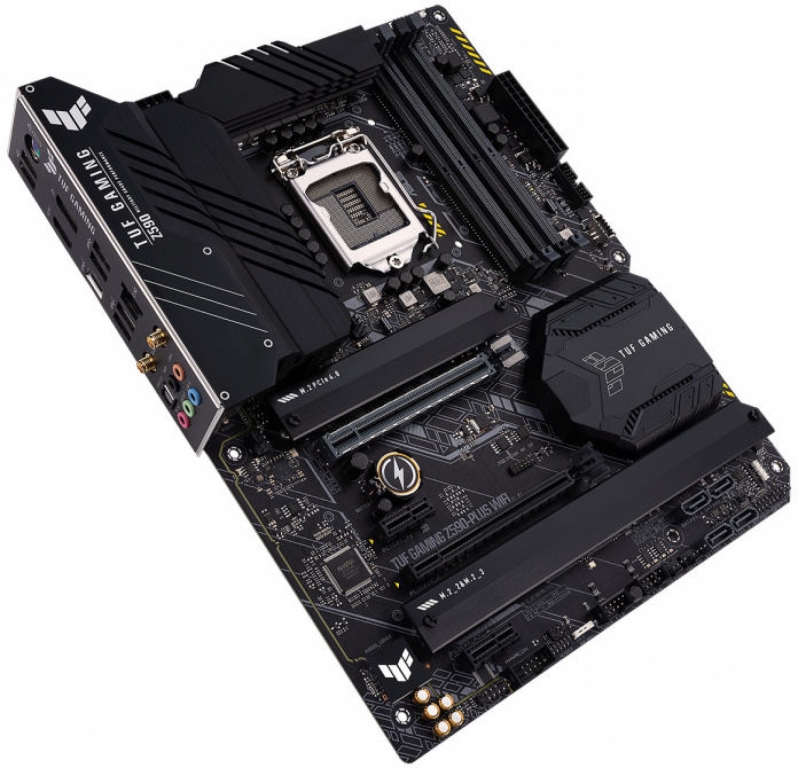 Below is ASUS' Z590 video preview, where you can get a hands-on look at the company's Z590 lineup.

You can join the discussion on ASUS' Z590 motherboard lineup for Intel 11th Generation processors on the OC3D Forums.