Micron has validated its LPDDR5X memory tech with MediaTek.

Micron promises performance and latency benefits with its LPDDR5X memory

Right now, Micron is set to be first to market with its LPDDR5X memory technology, promising users a 36% bandwidth boost over today's 5,500Mbps LPDDR5 memory modules and up to a 20% latency reduction under heavy loads, according to the slide below.

LPDDR5X is based on Micron's 1-alpha process technology, which is designed for high-end flagship-level smartphones. With this new memory type, Micron's promising 7500 Mbps speeds, though faster 8,533 Gbps modules are on the horizon.

Giving smartphones and other mobile devices access to this much memory bandwidth will enable faster multitasking on supported devices and allow smartphones to handle more intensive AI workloads. Micron also believes that LPDDR5X memory will be used with future VR headsets and other bandwidth-hungry devices.

Bandwidth is a major factor for all computational devices, especially all-in-one SOCs that contain a CPU, GPU and AI acceleration technologies on a single chip. With technologies like LPDDR5X, memory bandwidth will become less of a constraint for SOC makers, allowing device performance levels to be pushed to new heights.

What follows is Micron's Press Release for their LPDDR5X memory module validations with MediaTek. 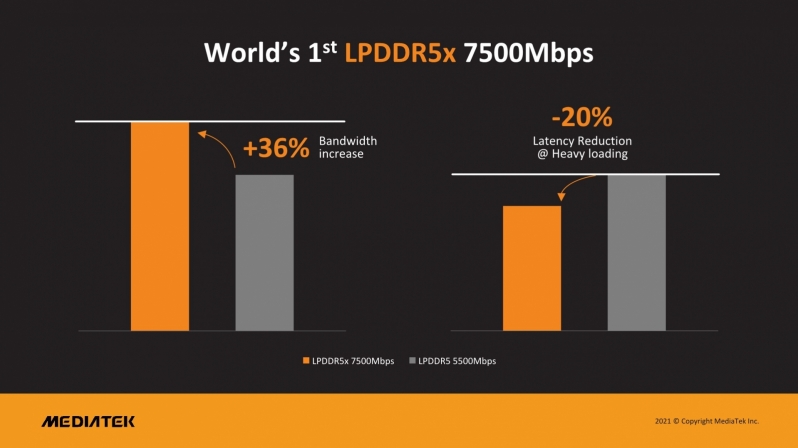 Micron Technology, Inc. announced today that MediaTek Inc. has validated Micron's low-power double data rate 5X (LPDDR5X) DRAM for MediaTek's new Dimensity 9000 5G flagship chipset for smartphones. Micron is the first semiconductor company to sample and validate this fastest, most advanced mobile memory in the industry and has shipped the first batch of samples of LPDDR5X built on its first-to-market 1α (1-alpha) node. Designed for high-end and flagship smartphones, Micron's LPDDR5X allows the smartphone ecosystem to unlock the next wave of data-intensive applications powered by artificial intelligence (AI) and 5G innovation.

The market delivery and validation of Micron's industry-leading 1α-based LPDDR5X solidifies its product innovation and leadership in the mobile ecosystem, following industry-first launches for LPDDR5, 1α-based LPDDR4X, 176-layer NAND-based UFS 3.1 and uMCP5 solutions. This most recent milestone follows quickly on the heels of JEDEC's July release of the LPDDR5X extension to LPDDR5, created to offer higher bandwidth and memory speed for enhanced 5G communication and performance while still conserving power. Micron has validated samples supporting data rates up to 7.5 Gb/s, with samples supporting data rates up to 8.533 Gb/s to follow. Peak LPDDR5X speeds of 8.533 Gb/s deliver up to 33% faster performance than previous-generation LPDDR5.

"Our mobile customers are increasingly demanding higher bandwidth to support complex, data-hungry applications built for the 5G era. With its superfast mobile memory, Micron's LPDDR5X squarely meets this challenge for flagship devices," said JC Hsu, corporate vice president and general manager of the Wireless Communications Business Unit at MediaTek. "The Dimensity 9000 will be the first to support this critical advancement of LPDDR5X, giving carriers and device-makers the capabilities they need to deliver incredible 5G experiences at the flagship tier."

Micron is collaborating with the world's leading smartphone manufacturers and chipset vendors to enable ecosystem innovation with LPDDR5X. As part of this effort, MediaTek's Dimensity 9000 mobile SoC will be the first to support LPDDR5X memory, delivering industry-leading peak bandwidth of 60 gigabytes per second for high-end and flagship smartphones. The new chipset is part of MediaTek's Dimensity 5G SoC portfolio, which combines the latest connectivity, multimedia, AI and imaging innovations to unlock the possibilities of 5G for consumers around the globe. Micron's delivery of LPDDR5X to partners combined with MediaTek's validation paves a path to broad market adoption.

You can join the discussion on Micron's LPDDR5X memory technology on the OC3D Forums.