The fastest and largest SSD ever demonstrated!

The Flash Memory Summit is currently ongoing, with NAND makers and SSD manufacturers from across the world showcasing their latest technologies. Seagate, a company how is more commonly known for their Hard Disk storage solutions has revealed what they call the largest and fastest SSD that has ever been demonstrated.
This SSD offers a colossal 64TB of storage and can achieve memory speed of up to 13GB/s, easily outperforming any currently available consumer SSD or RAID configuration. This SSD utilises a PCIe 16x interface and combines a total of eight M.2 8TB NVMe SSDs, which work together in this drive to offer industry leading performance.
Seagate's SSD is currently just a demo product, though the company did reveal that they planned on releasing customer samples of this SSD in the first half of 2018. Remember that this is an enterprise product only, so do not expect a review or even a consumer variant.

Seagate's Kent Smith says that this SSD is designed for big data analytics, with this SSD offering levels of performance that will allow users to offload data off of DRAM and into storage that offers an extremely large capacity as well as super fast performance.

We see this as an ideal technology for hyperscalers, HPC and big data analytics,

Applications where you have to offload tons of data off the DRAM into storage that’s fast and super-high capacity. Weather forecasting is one example, where you have a lot of data and variables to crunch. With speeds of 13GB/second and a record 64TB, this is an incredibly fast SSD with loads of capacity. 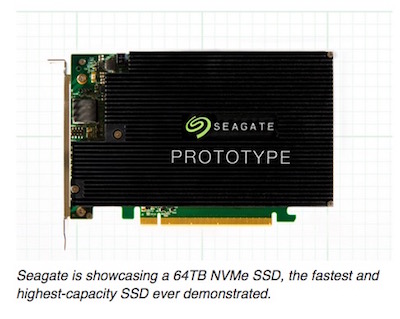 You can join the discussion on Seagate's new 64TB PCIe 16x NVMe SSD prototype on the OC3D Forums.

NeverBackDown
It's larger than most big home servers by itself...Quote

Bartacus
I want two in RAID0, just to be an arse.Quote

NeverBackDown
Quote:
Could it even handle it at x16? I'm not sure what the physical bandwidth limit is.Quote