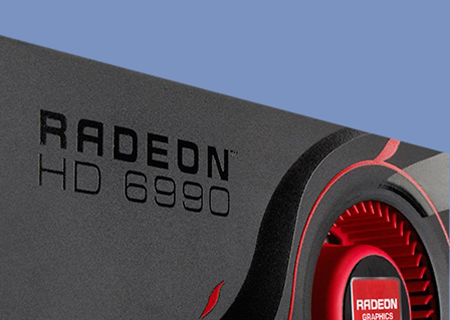 Semantics are always important. Precise wording can be the difference between the truth and a lie, when to the average person you're saying the same thing.

For example, if I now say the HD6990 is the fastest single GPU on the planet, that's not strictly true. Two GPUs of course. But then it's not the single fastest twin GPU solution either. That still understandably belongs to the crazy-fast GTX580 in SLI.

What this is is the fastest SINGLE CARD graphics solution available. And oh boy is it.

Given the slightly average performance of the HD6870 and HD6970 we all knew that AMDs eggs were most definitely in the HD6990 basket, but would they drop them on the way to market. Thankfully for all of us they've delivered something that is bad to the bone. No matter what you throw at the HD6990 it just shrugs its shoulders and ploughs ahead.

It's hugely faster than its generational predecessors. The previous ATI Kings were the two bespoke offerings from Asus and Sapphire, the Ares and Toxic respectively. This is in another league entirely and for about 60% of the price of either of those.

Sadly for every Dr Jeckyll there is a Mr Hyde, and the Mr Hyde for the HD6990 is the cooling solution. Even calling it a cooling solution seems to be overstating things. It's a fan that spins and some metal.

We, in descending order, like our heatsinks to be three things.

Firstly they must cool. We can forgive almost anything if the cooling potential is good enough. Nobody considered LN2 to be the height of design genius, but nobody cares because it's epic.
Secondly we like it to be quiet. When we tested the HD6970 we said that the fan seemed depressingly reluctant to actually spin up and shift the hot air, but at least when it did it was fairly quiet.
Finally, if both the above are taken care of, we like it to be aesthetically pleasing.

The MSI Twin Frozr II springs to mind as something which does all three, being amazing at cooling, quiet as a hoarse mouse and seriously gorgeous.

We experienced more than one thermal shutdown during the testing, and the card didn't even start to be cool until the fan was at 60% or more, by which point our ears were bleeding with 40% further to go.

Pricing starts at about £520 for a reference one, which is about identical to a couple of HD6970s and plenty cheaper than two GTX580s.

So all in all the underlying card is fanfreakingtastic, but let down horribly by the reference cooler. We can't wait to see what the partners bring to the table because with a half-decent cooler this really will be tough to resist.

Thanks to AMD for providing the HD6990 for review. Discuss it in our forums.