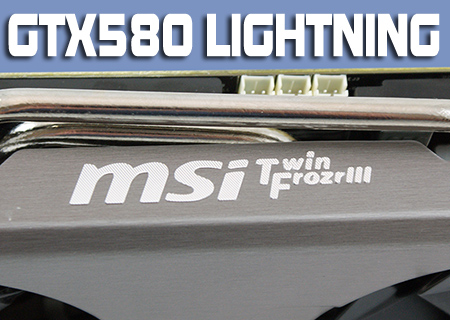 The Lightning is on our standard GPU testbed. You all know what to expect by now.

Wow. If the overclock wasn't impressive enough already we pushed it all the way up to 960MHz and it was rock solid. It's worth mentioning at this point that we could easily go beyond 960MHz but past this point the scores seemed to drop off on our particular model. It's definitely thing with the silicon lottery as we know one of our members has a card that benches consistently way past the 1GHz point.

As manufacturers have managed to supply chips with immense power but keep them cool at the same time it's becoming more common to find processors, central or graphics, that drop off past a certain point even if they can continue to be overclocked further.

Regardless the Lightning is insanely impressive at hitting 960 MHz with ease. As it's unlikely anyone will lay down such wedge on a card without overclocking it we will only be running at this speed today. 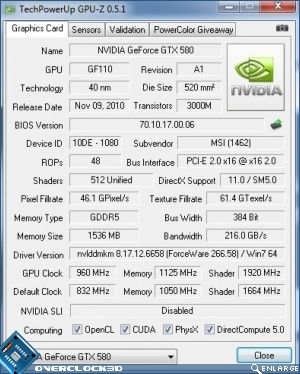 When we tested the GTX580 we were impressed with how well nVidia had solved the heat issues that blighted the GTX480. In comparison to the cooling capacity of the Twin Frozr III though it was hot. This, even with our overclock, quite happily churns through Unigine at 68°C. 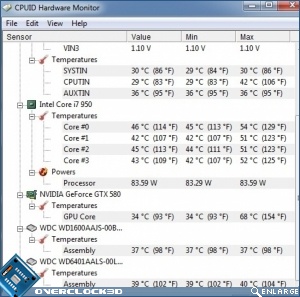 It is not just the final result that is the impressive part. After all, two Delta fans will keep something cool but you wouldn't want to be near them at the time. It's the silence with which the Twin Frozr III runs that is the most amazing element. It's just silent. Even running hard you barely hear the card and anyone with more than a couple of 120mm case fans probably wont hear it at all. Staggering.

adamjamesroe
AHHHHH! so that was what it was.

all the secracy when reviewing the H2

SnW
Quote:
IMO the MSI GPU's (FRZ) are always worth the wait

Thanks VB for the review

steve30x
Did you need to bump the voltage to get that kind of OC? I am tempted to OC my Palit GTX580 because it has the palit's cooler with two cooling fans on it. I just dont know what voltages are needed to OC these cards. The default voltage on my card is 1.0vQuote

Zeals
I just had an accident after looking at the results, brb.Quote
Reply