It seems difficult to believe that the ASUS Rampage is 10 years old. The original Rampage ran on the extremely popular LGA775 socket, supported by the X48 chipset. Since then we've had the famous Rampage II with its X58 LGA1366 socket, the first Rampage to come in the, now standard, red ROG packaging. The Rampage III also supported X58 and LGA1366, perhaps showing how lengthy the reign of this particular socket was. With the Rampage IV things moved forwards apace as it utilised the X79 chipset and LGA2011 socket, before finally we arrive at the X99 based Rampage V.

By virtue of ASUS insistence that the Rampage was only for Intel's most expensive CPUs that ride on the cutting edge of current CPU technology, the Rampage has managed to maintain its aura as a premium product for people who demand the very best.

Things have come a long way from those early days of white and blue plastics on a black PCB. The modern Rampage motherboard has established red and black colour schemes so firmly in the mind of the gaming public that, for a long while, it was impossible to have a harmonious system in any other colour. Even now red is still the predominant colour, although thankfully it is becoming much easier to obtain a variety of colours, largely with the proliferation of full RGB lighting. So everything has come full circle. Having made everyone use red and black, ASUS are now bringing chromatic neutrality to motherboards and providing multiple RGB lighting options to allow us to choose our weapon of choice.

The Rampage V Edition 10, for the 10th Anniversary, comes with all the main features that you'd expect to find on a modern flagship ASUS motherboard. As well as the usual ASUS hallmarks of SupremeFX audio, Extreme Digi + power phases, Game First LAN, Sonic Radar and other technologies unique to Taipei's finest, the real headline hardware items are the AURA lighting, ASUS OC socket and fan controller which supports everything from AIO pumps to any fan you can think of connecting to it. 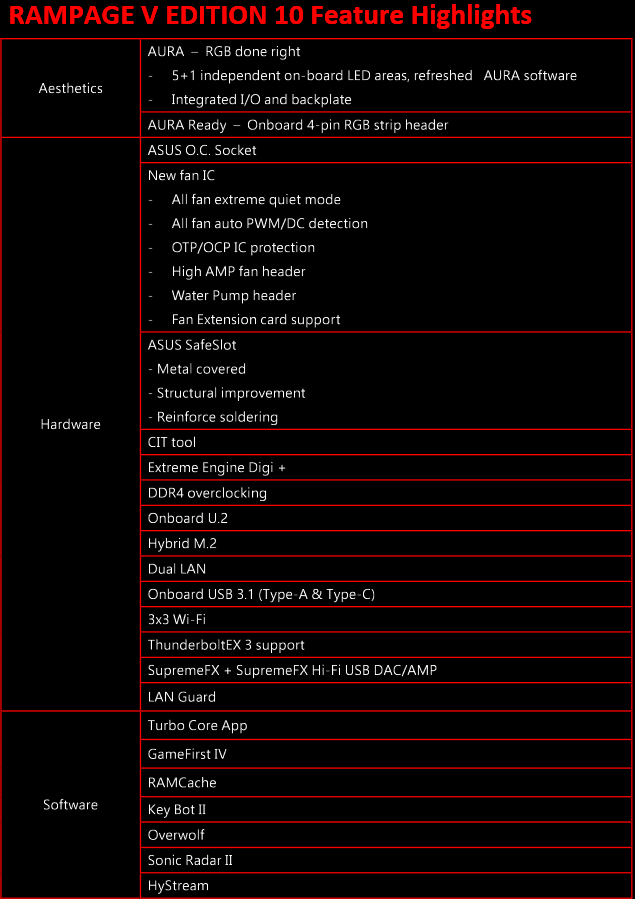 Let's get a closer look at the specifications.

Kaapstad
The first thing I noticed about mine when installing it was the weight, it is built like a tank and weighs a lot.

My only criticism is that there is a piece of polythene that covers the in out shield that is very difficult to peel off when installing as it is trapped by the design of the shield.

Other than the above it is a fantastic board and very easy to install and use.Quote

Luscious
Tom the board has 4 internal USB headers - 11-12 are located where the ROG-EXT connector is. If you're not using the Front Base you can use the 8+1 pins like a regular USB 2.0 header pair. Try it

Tolemac
I take it you didn't like the accessories

Vipermk2
I love the ROG logo and you would think they would go all out with vamping it up for the 10 year anniversary, but no, the post BIOS Logo is pitiful. There is too much emphasis on the 10 year thing and the ROG logo is tiny. Starting up the PC used to be a pleasure to watch, now it's not.

AlienALX
That board is insane. Looking around it there is literally no space on it at all where it is not smothered in components or chips or something. Nuts man.

Looking forward to this review. Amazing that it comes with a DAC/Amp too. It's gorgeous !Quote
Reply