If there is one thing we learnt from our initial reviews of the RTX 4090, it's that the card itself is more powerful than almost any CPU you can throw at it. The card is very much CPU limited in a swathe of games, and whilst the chances of you running an RTX 4090 with a Core i3 or Ryzen 3 are slender, nonetheless even if you're working with the most powerful processor there are still only a select number of scenarios where the card itself is the reason your framerate isn't higher.

Naturally though we know that, despite the enormous efficiency of Nvidia's GPU Boost technology there are many people who were curious as to exactly what you can achieve, should you take your courage in both hands and push the limits of your expensive purchase. Today's review is for you. We've got the MSI RTX 4090 Suprim X, a very good card, and their Afterburner overclocking software, and we're going to find out if there is a method to manually extract even more from this already powerful combination.

We'll go into more detail about the process at the end of this guide. We wanted to give the impatient amongst you, of whom we know there are many, a chance to have a quick look at the "big picture" overclocking, and then how it affects the results first. That way, having seen what it brings, you might be more willing to sit through 6 gradual steps.

Power draw and thermals are always going to be the main reason that you run into a wall with your overclocking. We tried a number of different power targets and fan speeds to attempt to extract even more performance. It's a delicate balance between getting the highest average clock speed, whilst keeping the temperatures low and stopping the card from being 'peaky'. We require smooth, consistent performance, not just a number which looks good in a bold yellow font on a clickbait thumbnail.

Why the big jump there? After 100% power we then started pushing the clock speed, but reached a scenario that isn't uncommon where the peak clock speed was higher, but therefore the card hotter, and the overall average clock speed dropped. Average clock speed is really what will give you the highest results, so rather than chase a high "screenshot" number, we backed things off to a maximum of 3000 MHz - yes, 3GHz, comfortably - which gave us an average clock speed of 2964 MHz. 164 MHz higher than we saw from the stock card, and a mere 36 MHz lower than the peak we'd set. This does come with a caveat that we'll cover at the end of todays demonstration. For now let's run through some benchmarks. You won't be surprised to learn the overclocked MSI Suprim X appears at the top of nearly all of them. 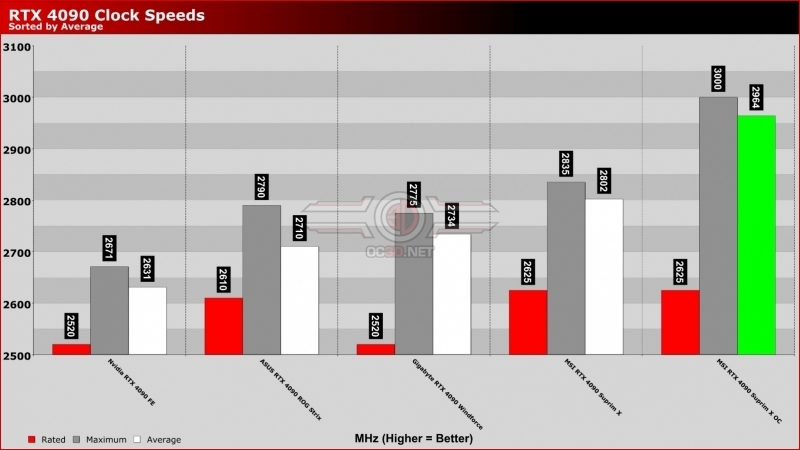 Dicehunter
When will you make the video public ? I need my OC3D fix