As we know a lot of you will want to see what the best performing cooler of a specific type is, we thought we'd do you a bit of a summary that looks at each style of cooler in turn.

Where better to start than with the big boys.  Of course, the Noctua NH-D15 comes out on top in sheer performance terms, but the Cryorig R1 Ultimate is only a fraction of a degree behind it, with the same going for the universal (low RAM interference) versions of both of these coolers.  We have to say though, that where we've always been uninspired by the aesthetics of the Noctua, the Cryorigs have has us drooling over the test rig.  Basically, if you don't mind trading 0.25 of a degree for something that looks sexy then the Cryorig is the one to go for.  It certainly gets our vote as it matches the performance, quality and price of the Noctua and beats it hands down with looks.  See Noctua, it can be done!  If however you don't fancy forking out £65-£70 for any of the above coolers you might want to have a look at the Raijintek Tisis.  It's just 2.75 degrees of the pace of the NH-D15, and only 0.75 degrees of the pace of the R1 Universal but will only cost you £44.99 which is an absolute steal

Losing a fin stack but staying with the 140mm fan based units it's still a noctua in the lead by a cool 2degrees over it's next nearest rival, the Scythe Mugan Max, which as you might imagine are considerably cheaper being a good £12 less than the Noctua.  Thing is, you wouldn't pick either of them as a prom date so if you're willing to trade 1.5 degrees off the performace of the Scythe for unquestionably better looks, then you can have the Cryorig H5 Universal  for a penny less at £37.99.  You may have noticed that while we're talking about looks we haven't mentioned the bequiet Dark Rock3.  The reason for this is that although it's a pretty sexy cooler, it falls short in the performance stakes to the point where we couldn't really recommend at the price of £51.75.

Surprisingly there were only two 120mm fan based twin stack coolers in the test.  Even more surprisingly (or perhaps not) the single slim stack Noctua NH-U12S is tied for first place with the very thick single stack Scythe Ninja, OK, so the Ninja costs £11.50 less but the Ninja looks more like a twin stack that somebody forgot to chop in half than a traditional single stack cooler, so you have to ask why isn't it dissipating the heat.  And as for the bequiet, Dark Rock Pro3, that thing actually is a twin fan, twin stack cooler costing a heck of a lot more money and totally failing to perform as well as it should, as does the Gelid "The Black Edition".  The real star of this show though is the Arctic Freezer i32.  At just £23.97 it's extremely affordable and only 2 degrees off the pace of the Noctua which will cost you more than twice as much. 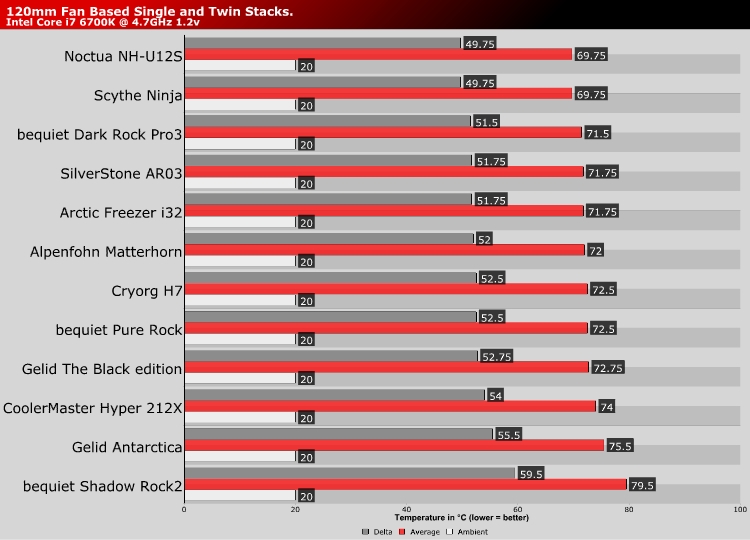 If you're building into a SFF or HTPC case then clearance above the CPU can be an issue.  This is, of course where the Top Flow fans come into their own.  In a bit of a shock result for Noctua, it's actually the SilverStone NT06 Pro that takes first place, with both of these 120mm fan based units beating the pair of 140mm fan based units.  Temps wise, as there's actually only 1 degree separating all four coolers in this category, you'd be well advised to make you purchase based on either cost or aesthetics.

Ah, the mighty minis.  Don't underestimate these small but perfectly formed coolers for a second though, they are often capable of some truly inspiring performance.  Take for example the pair of Noctuas, both of which out perform every cooler in the Top Flow category, and the mighty Arctic Freezer i11 which beats a good many 120mm and 140mm tower coolers costing much more than it's £23.9.  If you want real bang for your buck though, take a look at the Cryorig M9, this absolute belter of a cooler will keep the lid on things at 4.7GHz and is the cheapest cooler in the mega test costing only £16.98.

shambles1980
Had a quick look..
dont see any AIO's in there as a comparison.. I think it would have been nice to see atleast 1-2 of the most popular ones in there, it would just round out the comparisons a bit better imo if you also factor noise efficiency and redundancy.Quote

PixxHD
Great article, good to see my D15 is still a beast in the air cooled department.

One small thing, while reading the D15 page I couldn't help but notice something wrong.


Quote:
This is actually not the case, the fan can be positioned forward due to the design of the mounting which allows for big RAM if you have the case clearance for the fan to protrude off the cooler.Quote

Spiderz
That explains all the hype around the Cryorig lot, good prices and performance there. Great to see so many all together in one place for comparison.Quote

Helix
The BeQuiet coolers are meant to be tightened from the back of the motherboard, not above and between the fins. No wonder you found it hard to do.. If you are saying that poor fitting is the reason they don't perform well, then the test results are not representative of the coolers performance.Quote

The_Governour
I bought the Be Quiet Dark Rock TF for the looks for the Lian Li Q10 build - was supriced that it placed so low.

Have the Raijintek Pallas on my living room rig cooling a G3258 and I thought it was great.Quote
Reply