The ProArt has a very different packaging style to the usual ASUS offerings, being bedecked in gold trimmings on a black background, and all the technology icons moved to the top below the name, rather than found at the bottom edge of the box. 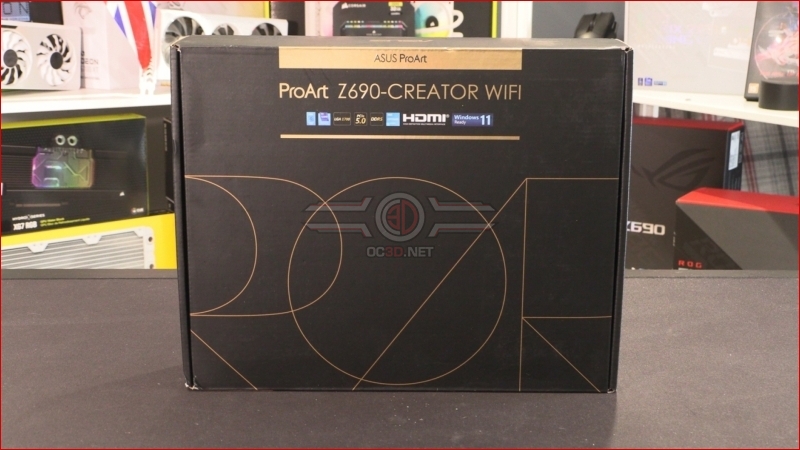 The most interesting thing in our opinion, although we appreciate it might be divisive, is the transluscent IO cover. Rather than a giant chunk of plastic with some RGB lighting built in, the ProArt Creator goes with a see through option and the stylised ProArt logo in gold text. Beneath those VRM heatsinks at 16+1 70A power phases, which should be more than enough to cope with the best of the Intel 12th Gen processors. 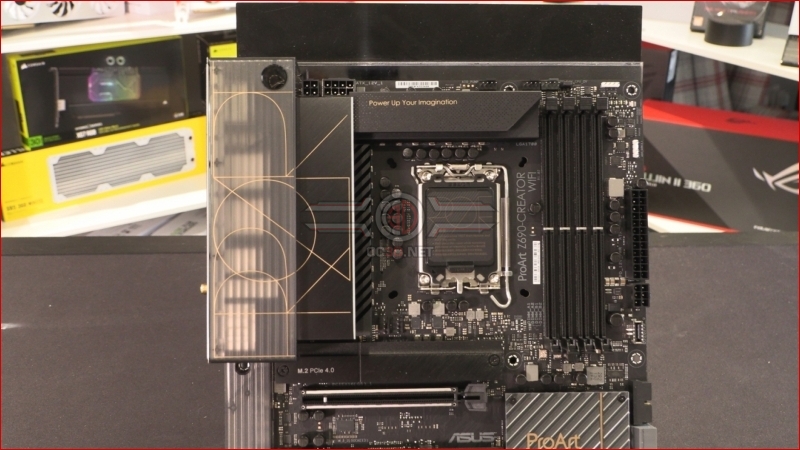 The lower half of the Z690 ProArt is dominated by the many M.2 PCIe 4.0 slots that ensure even the most creative of you won't be left wanting for fast storage options. The performance gap between SATA SSDs and M.2 NVMe drives is such, and the price close enough, that when you're rendering huge streams of data you need all the speed you can get and the Creator has you covered. 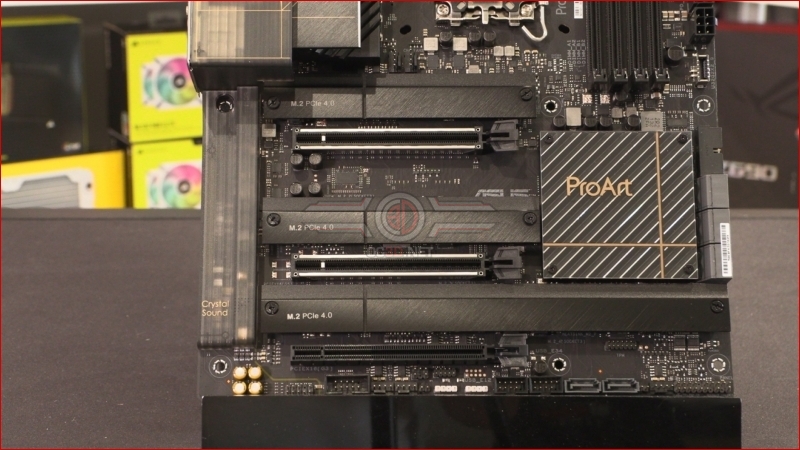 At the top corner we find three fan headers for the CPU cooling, including a dedicated pump header. Should you want some RGB lighting in your system then the AURA Sync headers are here too. 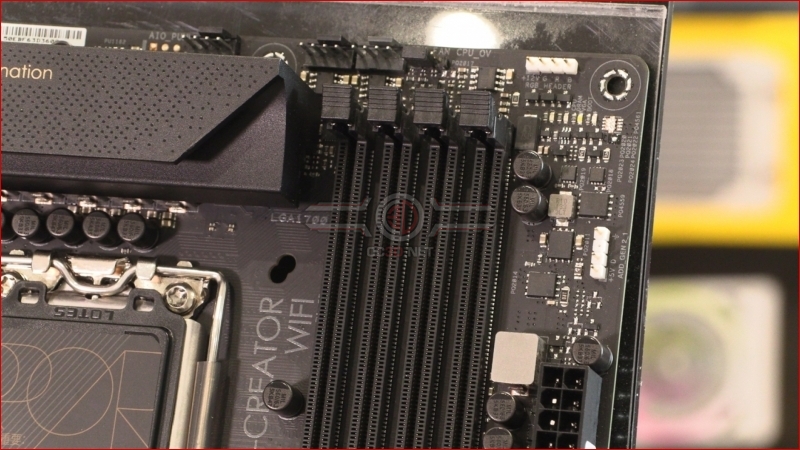 Like all high end Z690 motherboards the ProArt supports DDR5 for maximum data throughput on those intensive tasks. Additionally the 24 pin ATX power socket we're all used to is aided by another 6 pin header to give the motherboard the maximum power available, should you fill every available slot. You can also see the Type-C front panel connector here. 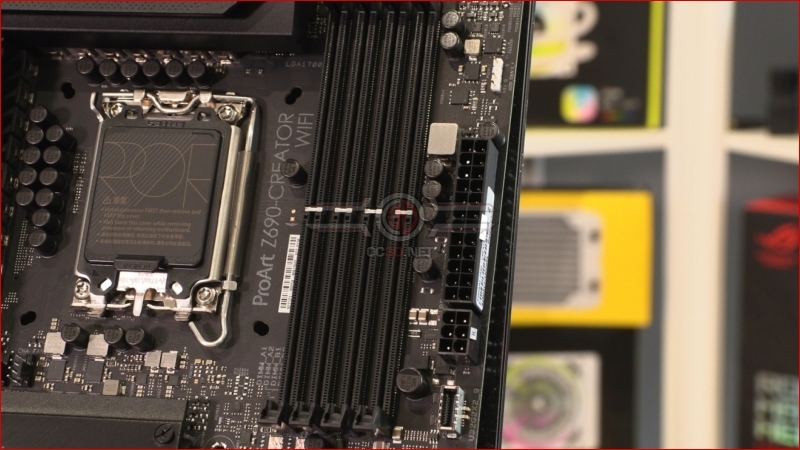 Moving further down we have a USB Type-A front panel header above six SATA ports. You can also seee how chunky the chipset heatsink is, with its perspex ProArt cover just begging to be replaced with a customised logo of your choosing. Casting your eye a little along the bottom edge passed the front panel connectors and you'll find two more SATA ports, albeit with a vertical orientation.

The sound cover is also transluscent, just like the IO section. Again we like it just because it's so different to most designs we come across. At the bottom edge of the ProArt you'll find all the headers you need, with two USB 2.0, the other pair of AURA Sync lighting RGB and ARGB headers, and yet more fan headers. Lovely. 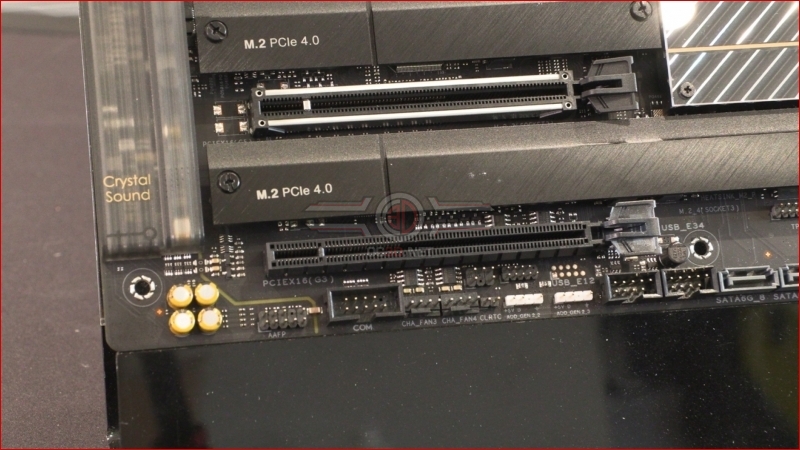 Lastly the ProArt shows off its Creator designation with a huge selection of USB ports and video outputs. If that isn't enough for you there are Thunderbolt connectors too. Networking is covered by a now-standard WiFi 6E wireless option, Intel 2.5G LAN port, and the technology that someone mitigates the pricing of the ProArt with a 10G LAN on board. If you've ever dipped your toes in to the waters of creation you'll understand how rapidly you can create huge files, so being able to move them on a fast network is vital. 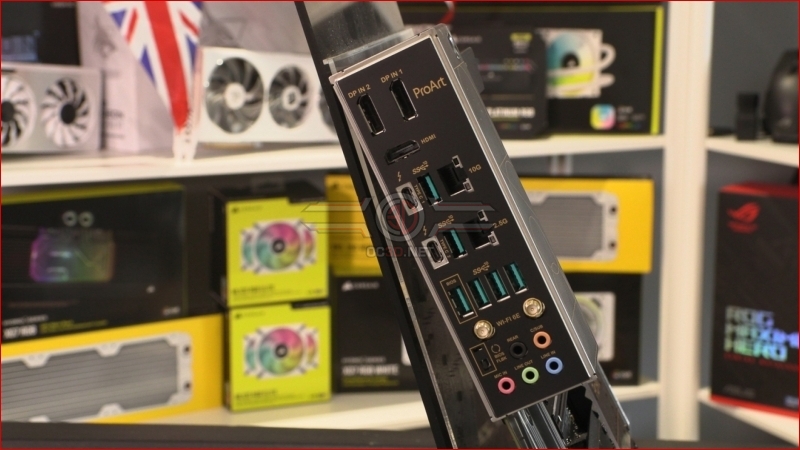